MARKET
Vidalia:
Danny Ray with Ray Farms in Glennville, GA told us on May 16 that quality continues to be great with this year’s Vidalia crop. “Harvest has been very smooth, and we are very happy with the high quality,” Danny said. “With the tough winter we had, it has really surprised us all.” Danny mentioned that market is down this week. “You know the market is a little off, but it seemed to level out and so we anticipate it will turn around as other areas finish up.” Danny said Ray Farms is shipping all sizes. “We are shipping all sizes now, and these later onions coming on have even better sizing.”

Texas Rio Grande Valley:
Don Ed Holmes with The Onion House in Weslaco said on May 6 he expects to finish clipping Monday, May 25, and will ship all next week to close out the season. “We’re shipping the Texas Leona variety, and it has very good quality,” Don Ed said.

Arizona:
Gerry Valois with Camarillo, CA-based Western Onion was in Phoenix on May 16 and said while he couldn’t comment on Imperial Valley CA heat, “Weather here in Arizona has been favorable, not real hot. Daytime temps this week are forecast 95 to 100 and the nights 65 to 75.” Gerry added that onion quality in the Phoenix area is good, but “markets are poor, and we’re not seeing much relief in the next couple of weeks. Maybe sometime in June.”

Idaho-Eastern Oregon/California San Joaquin Valley
Steve Baker with Baker & Murakami Produce Co. in Ontario, OR May 16 told us the company is finishing up its IEO deal with some contract packing. “We will complete our shipments out of Idaho-E. Oregon next week, and will start up in the San Joaquin Valley around May 25,” Steve said. 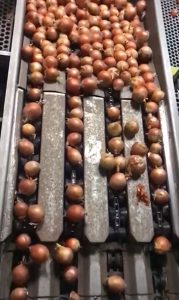 Washington:
Larry Bauman with L&L Ag. Production and Target Ag in Othello sent OnionBusiness.com images of the last of their 2017-2018 packing, which we have included here. “We will finish packing last year’s crop this week,” Larry said. “The onion quality has held very well this year.” Larry has provided us with this week’s featured image of the L&L red onion crop and he has also provided the photo shown here of the last packing of 2017-2018 onions.  For the video of the packing, look for it soon on OnionBusiness.com Facebook and Instagram pages.

John Vlahandreas with Wada Farms in Idaho Falls, ID told us on May 16 that he is still writing orders for his Washington shipper. “I am still moving Washington onions with good quality, and shipments from there will most likely run through June 15,” he said.

California Imperial Valley:
Derek Ennis with L&M Cos. in Raleigh, NC, told us that L&M is currently shipping out of Calipatria. “Right now the market is weak,” he said on May 6. “Demand is OK, but there are so many onions out there and the price is reflecting the high volume of supplies. We are hoping that will change over the course of the next few weeks.” Derek said L&M’s Imperial Valley onion quality is “excellent,” adding, “We are shipping all colors, and we have a very good supply of jumbos. Colossals and supers are tight and we have a fair supply of mediums. Depending on demand and the market, we should be wrapping it up in California by June 2.”

John Vlahandreas with Wada Farms reported from his Caston Farms sales office May 16. “I have been coming down to the desert for 24 years and I have never seen it this bad,” he said. “There is just no movement. It seems that Mother’s Day usually throws a kink in things because folks in the US take Mother’s Day very seriously and take time off. But this season is not good right now, and pricing is matching demand.” John said the Caston onions are excellent. “We have larger size profiles with great quality. Lots of jumbos, colossals, and supers. In fact, we have only shipped three loads of mediums since we got started,” he said. John noted the Imperial Valley season will run through the end of May.

CROP
Washington:
Larry Bauman with L&L Ag. Production in Othello reported on May 16 that his crop is “progressing well.” He said, “The weather has been unusually warm which has helped with our spray program. And the heat units are ahead of last year.”

Walla Walla:
Michael J. Locati with Pacific Agra Pack in Walla Walla told us the onions “are shaping up very nicely,” and he said, “It looks to be normal to be a potentially early harvest if the heat units continue. Very excited about this year.” Pacific Agra Farms markets through Keystone Fruit Marketing and its office in Walla Walla, with all its onions packed at Walla Walla River Packing and Storage. This year the company will have between 10 and 15 percent of its volume in organics, Michael said earlier in the growing season.

Idaho-Eastern Oregon:
Grant Kitamura with Baker & Murakami Produce Co. in Ontario, OR, told us the Treasure Valley onion crop is doing well. “We have had wonderful warm weather with some days into the 80s,” Grant said. “Fields have been fertilized, and many have had a second round of irrigation. Stands throughout the valley are about eight inches tall. We are looking at continued good weather in the forecast. So far, so good.”

New Mexico:
Derek Ennis with L&M Companies in Raleigh, NC, reported on May 16 that L&M is excited to get going with its New Mexico program with Billy the Kid Produce. “The New Mexico crop is looking very nice,” Derek said. “The early stuff will have nice sizing to it, and we anticipate starting up on Memorial Day.”

Colorado/Kansas/Utah:
Derek Ennis with L&M Companies in Raleigh, NC, reported on May 16 that L&M will be completing planting in the Colorado/Kansas region soon. “Everything has been going great there,” Derek said. “We have had near perfect weather, and planting is going according to plan.”

Don Ed Holmes with The Onion House in Weslaco, TX, said his growers in Colorado and Utah are “both saying this is one of the prettiest crops in years.” Colorado will start up in September after Labor Day, and Utah will ship in October.