Market and Crop Update for May 25

California Imperial Valley:
Derek Ennis with L&M Cos. in Raleigh, NC, told us May 24 the market has been steady for L&M’s California onions shipping out of Calipatria. “Demand on reds is steady right, now but the market is weak,” he said. “It has dropped $1 since the beginning of the week. We will have a big slug of reds coming on next week too. Our availability on yellows is heavy to jumbos and mediums. We remain tight on colossal and supers, and it will stay that way for the rest of our season.” Derek said L&M will be shipping out of California for the next two to three weeks.

Cindy Elrod with Peri and Sons based in Yerington, NV, told us it’s been a “challenging year in El Centro.” Peri is “not quite done yet” in that region, and Cindy said, “Reds were the last to mature, and we’ll be packing those in El Centro through next week. We are finished with whites and should be finished with yellows by the end of this week.”

Corey Griswold with ProSource Inc. in Hailey, ID, reported they will finish shipping out the Imperial Valley in about a week before moving up to Central California. “We still have some availability on yellows, and we still have a lot reds yet to ship,” Corey said.

California San Joaquin Valley:
Cindy Elrod with Peri and Sons said the operation will be packing in Firebaugh early next week. “Whites first, then yellows mid to late week. Reds in a couple of weeks.” Cindy said there will be “no overlap of varieties between our El Centro and Firebaugh deals.”

Idaho-Eastern Oregon:
Grant Kitamura with Murakami Produce LLC in Ontario, OR, said on May 24 that his operation would be finished packing “today or tomorrow.” Grant said, “Boy, with these last loads I was really impressed with the high quality. We had a great crop this year and the onions stored really well.”

Arizona:
Chris Franzoy with Young Guns told us on May 19, “We are about 90 percent of the way through our Arizona deal. Quality is excellent and demand has been good. No labor issues thus far. Also, my son Tristan has joined our sales and marketing team.”

Paul Reeping with G Farms in Litchfield Park reported on May 24 that demand is slow this week for jumbo yellows, but colossals, medium and pre-pack yellows are moving well. “The market is steady,” Paul said. “The weather has been very mild, but that is changing this week. Our availability is dropping because of yields, and it looks like we will be finishing up toward the middle of next week.”

New Mexico:
James Johnson with Carzalia Valley in Columbus said his operation started packing on May 20, and on May 24 they were going “full bore.” Reds, whites and yellows are shipping, and James said sizing is heavy to jumbos. He noted the sweet program is also going. “So much for our soft start,” he said. He expects to wind down around Aug. 10. “Everything has sized well, and the yields have been fantastic,” James said. “The fall seeded are just excellent yield and excellent quality.” Weather this season has been conducive to a great crop, and James said the entire region has “either started or will start soon.”

Chris Franzoy with Young Guns Produce in Hatch told us on May 24, “We plan to start harvesting in New Mexico May 29 with good volume on all sizes of yellows, whites and reds. Our sweet onion program will commence June 10 and run through the summer.”

Marvin Davis with Tex-Mex Sales in McAllen, TX, said Mike is now in the Las Cruces area for Tex-Mex’s New Mexico deal, which started the week of May 15. Marvin said all sizes and colors are shipping, and the crop has come in with good size and quality.

Derek Ennis with L&M Cos. in Raleigh, NC, told us L&M will start shipping New Mexico the week of May 29, adding, “The crop is looking really nice. I was there week before last, and everything looked great.” He said L&M will ship all sizes and colors out of New Mexico.

Corey Griswold with ProSource Inc. in Hailey, ID, told us the company is beginning its shipping season in Hatch, NM. “The crop looks sharp,” Corey said. “We have some smaller sizing on the front end leaning toward mediums, but we expect the size profile to get larger as we get into the season. The quality this year looks really good, and we have all colors and sizes available.”

Georgia/Vidalia:
John Shuman with Shuman Produce in Reidsville, GA, reported that his company is seeing an increase in volume this week leading into the Memorial Day weekend. “With grilling season now in swing, we expect RealSweet Vidalia onions to be a staple at outdoor gatherings,” John said. “We are seeing better demand on consumer bags this week. The market is steady this week as most grower/shippers are finished out of the field and shipping from cold storage supplies. A few shippers still have fresh season supplies this week, but that will soon be over due to heavy rains this week across the region.” John said he expects the market to strengthen as the industry converts exclusively to cold storage heading into June. “We are now pulling exclusively out of storage with full availability and high quality for the summer months. The onions we are seeing out of storage are bright and beautiful.”

Mexico:
Marvin Davis with Tex-Mex Sales in McAllen, TX, said his company’s Chihuahua deal will continue into August, and he said the quality and size out of West Mexico has been “very, very good.” All colors and sizes are moving, he said.

Walla Walla, Washington:
Michael J. Locati of Mike Locati Farms Inc. in Walla Walla told us on May 24 he’s anticipating a normal start to the season with a mid-June harvest. “It looks like a normal year,” Michael said. “The crop looks good, and we’ve been having some heat come through.” He said the stands look good, and the onions “are growing with this warm weather.”

Idaho-Eastern Oregon:
Ryan Stewart with Fort Boise Produce in Parma, ID, told us that company has cleaned up its 2016 crop, and now the focus is on the new crop, which he said should be harvested beginning mid-to-late August. “So far, so good,” Ryan said of the 2017 onions. “We’re waiting on some warm weather now,” he said, but he noted the crop is on pace with perhaps a slight delay at this point.

Corey Griswold with ProSource Inc. in Hailey, ID, reported the Idaho-Oregon crop is behind schedule. “We had a couple of pretty good licks with weather, and that has set the crop back,” Corey said. “Normally, we are one of the first ones to start shipping. Generally, it’s the first or second week in August, and we are not on track for that this season. It could be the latter part of August. And who knows? With this early start to New Mexico, there is a chance that there could be a gap. We’ll have to wait and see.”

Northern Colorado:
Ryan Fagerberg at Fagerberg Produce/Fagerberg Farms in Eaton told us on May 24, “We received two inches of rain last week. It didn’t create any cause for concern, though it was a nuisance. We are now able to get back in the fields and everything is back on an ordinary schedule.” Fagerberg’s shipping season is typically Aug. 1-March 15.

Southeastern Colorado-Kansas:
Derek Ennis with L&M Companies in Raleigh, NC, reported on May 24 that the SE Colorado and Kansas crops are looking very good. “We did get a freak snow storm recently that may have put us back a week, but Mother Nature might allow us to catch up,” he said. He added, “Overall the crop is looking really good,” and he noted that L&M’s program and acreage for Colorado-Kansas remains the same as last year’s. 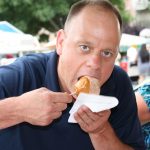