Market and Crop Update for May 4

Mexico:
Steve Smith with National Onion in Deming, NM, was in Chihuahua on May 3 and told us his operation started bringing in whites on May 2. Yellows will start Monday, May 8, and the deal will go through July 10, overlapping a bit with New Mexico. Steve said quality coming out of Chihuahua is good, and the crop came in 10 days earlier than normal. “There are a lot of jumbos,” he said. “They’re all transplants, and the 900 acres are planted to be jumbos.”

Texas-Winter Garden:
David DeBerry with Southwest Onions in Mission told us, “Our Winter Garden harvest is underway on all colors. Sizing is normal with mostly jumbo but some larger and smaller. Higher than normal yields has resulted in us needing to move one-third of the crop to pack down at our Edinburg facility. Yields so far, knock on wood, are lightly above normal, and crop conditions are very good with healthy plants and little pest or disease pressure. We should be in volume for all of May in all three colors.”

Idaho-Eastern Oregon:
Chris Woo with Murakami Produce LLC in Ontario, OR, reported Murakami will be shipping for the next two to three weeks. “The quality coming out of the ice box is good,” Chris said. “And it’s no accident that we are still shipping. We have had this plan at the outset and line up enough cold storage to take care of the onions we wanted to ship into May. Right now, we are shipping for processors, and the rest is for open market.” Chris said that a few customers have stayed with Murakami for normal orders and haven’t made the switch. “Our production is keeping up with the orders that are coming in,” Chris said.

Washington:
Brenden Kent with Sunset Produce in Prosser said Sunset will be shipping for about two more weeks. “We are shipping some smaller contract items, and then we will be finished for the season,” Brenden said. “I have been in the business for 15 year, and I have never seen a year like this. It’s been a wild year with all the ups and downs in the market. I don’t think it’s one we will repeat any time soon.”

Looks like the harvest in the Imperial Valley is going well.  Many thanks to Robert Bell of Western Onion Sales in Camarillo, CA for provided our photos this week. 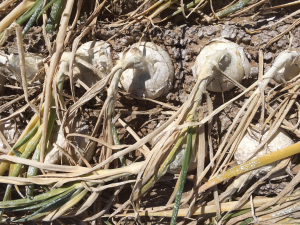 Washington:
Brenden Kent with Sunset Produce in Prosser reported Sunset has all its onions planted. “We are going to be two to three weeks later this year,” Brenden said. “We expect a couple of warmer days coming up which may help us catch up a little, but we are still going to be late.” He said the Sunset program will be almost identical to last season. “I do know that the acreage in Washington is going to be down,” Brenden said. “Some smaller growers have planted fewer acres, and in some cases they didn’t plant any onions at all.”

Lorin Grigg with Grigg Farms in Quincy, WA, said on May 3 his 2017 onion crop is planted. “We finished planting a couple of weeks ago, a little later than normal,” Lorin said. The entire crop is direct seeded. “We’ll start harvest in early September,” he added. Lorin grows 60 percent yellows and 40 percent Red Wing reds, and he ships through April, with loads going to retail, foodservice and other receivers. For the past three years Calandri/Sonrise Farms in Lancaster, CA, has handled sales, Lorin said.

Idaho-Eastern Oregon:
Grant Kitamura with Murakami Produce Company LLC in Ontario, OR, told us May 3 all of Murakami growers have their onions planted. “The stands are in great shape, and some are measuring five to six inches,” Grant said. “Onions planted later are starting to emerge, and we are looking at some great weather — into the 80s — for the next several days, and our growers are preparing to irrigate.” Grant said that between Murakami and its new partner, Baker Packing in Ontario, they will have the same program as last year. See Grants photos listed under “Photo Gallery of the Week”

Kay Riley with Snake River Produce in Nyssa, OR, told us on May 3, “I’m not completely sure everything is planted, which is very late. Most of the growers planted in a reasonable time, and we have everything from out of the ground to two-leaf stage to some not up yet. But we have adequate moisture, and the weather is nice, so the onions will grow.” Kay said it’s a “real mixed bag, and I’m just thankful they’re planting. With planting there’s hope.” He said he doesn’t expect an early harvest, but “with good weather we’ll still have onions out of the Treasure Valley in early August.” He added, “But I expect our big volume to hit after Labor Day.” Snake River has a sweet program it will continue, and Kay said a “few more whites have been planted this year.” Otherwise, he said, the program stays heavy to yellows with some reds as well.

New Mexico:
Steve Smith with National Onion in Deming said on May 4 his New Mexico crop will start shipping June 5 and go to the end of July. “The crop is early, and some people could actually start mid-May. Our crop in Deming will get going June 5.” He said the all-yellow crop “looks good,” and he noted, “We have another month to go.” Steve said they will pack out mostly jumbos in 50-pound sacks for foodservice. He noted transportation looks to be better this year than last, but labor remains a challenge. Steve said in the past grower/shippers relied on labor contractors who were responsible for handling worker wages and taxes. Now the grower must provide workman’s comp and handle documentation.

James Johnson with Carzalia Valley Produce in Columbus said on May 3, “Everything is on track for an early start. We’ll move into the field on June 10 or 11 and start packing June 15 or 16.” He said the crop looks “fantastic – it looks like excellent quality.” James added the deal will wrap up around Aug. 10, which is correlates to the early start. “It’s about two weeks earlier than usual, but it’s where our window has landed,” he said.

Retail Snapshots for May 11