As with most shippers in the federally protected Walla Walla Sweet Onion growing area – the Walla Walla Valley of Southeast Washington and Northeast Oregon – Michael J. Locati is looking at a normal start date of June 15 for this year’s crop.

Michael, who is president of Mike Locati Farms Inc. and chairs the Walla Walla Sweet Onion Marketing Committee, told OnionBusiness.com the region has between 500 and 600 acres of the Washington State Vegetable in the ground for 2017. In case you’re wondering, the state veggie designation came in 2007 by proclamation of then-Gov. Christine Gregoire.

About 70 percent of the crop is planted in the fall, with the remaining 30 percent going in as transplants in the spring. And Michael said most growers use drip irrigation if they are transplanting or direct-seeding in the spring.

When asked how this year’s crop is doing, he said, “It was a long winter. Lots of snow cover helped, but the carryover rain and lack of heat units has made it hard this spring to get onions to grow.”

And harvest will come mid-June “at the earliest and could be pushed back further depending on how the early varieties mature and the heat units we get in May,” he said in late April. Michael said there is one organic producer in the region, Walla Walla Organics.

About the Locati farm, Michael is the fourth generation of Locatis to farm Walla Walla Sweets.

“Recently we purchased stock in Walla Walla River Packing and Storage,” Michael said. “We have combined forces with the Hamada group, which is beginning to phase out of farming and pass their shares to the next generation.”

That generation consists of Michael as well as Art Villa, Videl Pedroza and Luke Hamada.

“The joint venture has allowed us to help each other as we battle through labor issues, regulations, economies of scale and other issues. Locati Farms and Pacific Agra Farms [Harry Hamada manager] are very excited about the future and hope to continue this venture for the fifth and sixth generations of WWSO production!”

Locati Farms is a bit outside the norm in its planting, with 60 percent of the crop planted in the fall and 40 spring direct seeded and transplant. Michael said drip is used only on the spring and transplant onions.

The grower cures, packs and stores at Walla Walla River Packing and Storage.

“We use the state-of-the-art facility that air cures our onions,” Michael said. “The onions have short shelf, and they will be harvested, cured and shipped within seven days.”

And he said the season is anticipated to run until Aug. 15.

When asked about updates to the packing shed and new technology in sizing/grading, Michael Locati said there is “lots in the works.” 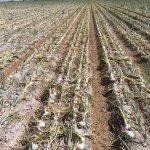 Market and Crop Update for May 4