Market and Crop Update for November 16

Hey, loyal OnionBusiness.com readers!
We’re very gratified you’ve come to rely on OnionBusiness.com for timely and “from the horse’s mouth” Market and Crop reports. Thanks for your ongoing support and for making us your go-to source!

Next week is Thanksgiving, and we will be publishing on Wednesday rather than Thursday. That means a short breather from our weekly phone calls and reports, BUT we’ll have an in-depth look at the summer/fall season, with real-time info back in place on Thursday, Nov. 30.

As always, we are so appreciative of your participating, and anytime you’d like to contribute, please feel free to email us at info@onionbusiness.com with your phone and email info. We’ll add you to our contacts and call you for updates during your planting, harvest and shipping seasons!

And now… here’s this week’s Market and Crop. The buzz is transportation.

MARKET
Colorado Western Slope/Utah:
Don Ed Holmes with The Onion House in Weslaco, TX, said his Colorado and Utah deals were “in the middle of the Thanksgiving business, and we’re sold out for the week.” He added, “It’s been phenomenal demand all week, and we’ve had fairly good access. We’re getting most of our trucks out of Colorado and Utah.” Pricing, he said, “is trending a little stronger this week, and quality is looking very good.” Don Ed said the industry is in one of the three best movement periods of the year, the other two being Christmas and July 4, and he said, “It will slow down a little after Thanksgiving but pick up again before Christmas. Movement is very good now.” Addressing the transportation issue, Don Ed said Texas has seen truck driving schools open up in recent years in the Rio Grande Valley. “I have a friend who has a trucking line, and his biggest challenge isn’t finding business; it’s finding drivers. The truck people have all the freight they can say grace to, but they have to hire drivers who’ve never had a felony or a DWI or DUI. And they have to speak some English. The three schools in this area are graduating a lot of drivers, and for guys who are looking for a job, this is good work.”

Nevada:
Cindy Elrod with Peri & Sons in Yerington reported on Nov. 15, “We are packing full steam in Yerington. The market is strong and firm and should have good undertones for higher pricing. However, transportation is a real issue as we are experiencing a lack of capacity and untimely deliveries limiting sales and movement.” She added, “The current situation seems to be stalling our ability to move prices higher at shipping point. The combination of this season’s pricing and the excessively high freight rates is producing delivered pricing that is significantly higher than in the last few years.” Cindy continued, “A couple of our retail customers have noted that this situation has caused a disruption in the typical produce selection for holiday ads and a reduction in margin for produce departments as some retailers have not yet opted to move pricing to higher levels. We are looking forward to December and January to see if the capacity for transportation improves allowing for improved flow of this season’s crop.”

Idaho-Eastern Oregon:
Steve Baker with Baker & Murakami Produce in Ontario, OR, reported this week that demand has been good, noting, “Demand has been good on all sizes, but the last few days medium yellows and medium whites have been in greater demand than in previous weeks.” Steve said the market “for the most part has been fairly steady,” and he said, “Medium yellows prices have climbed up slightly from last week.” The reason for that increase, he said, comes from outside the United States. “The demand on the medium yellow market, in my opinion, is helped by increased interest from Mexico. They have been looking hard for medium yellows all week.” Steve also said supplies “at times are tight.” He explained, “We are having to manage our supplies closer this year than in years past.”

Bernie Pavlock with ProSource in Hailey, ID, said some of Golden West’s product started packing at the operation’s new facility near Parma, ID, the first week of November. He said, “ProSource is very excited about the capabilities of this flexible packing facility. Packaging, sizing and grading can all be customized to meet any customer’s needs.” He added the new warehouse is expected to be in full operation shortly after Thanksgiving. Bernie said initially he saw concern about “a shortage of large onions,” and he added, “There has been supply.” Looking ahead, he said the next inflection point “will depend on what sort of crop Texas and Mexico have.”

Oregon:
Jared Gutierrez with Columbia Basin Onion in Hermiston reported that demand has been good this week with continued Thanksgiving pull. “Demand has been pretty even across the board,” he said. “Right now we are managing our supplies.” He also said that good prices are holding. “Our quality is looking very good, and an additional bright spot is that our export business is picking up too.” Jared said transportation continues to be “tough.”

Scott Jensen with Boardman Foods in Boardman shared his optimistic perspective for this season with OnionBusiness.com during the recent PNVA conference in the Tri-Cities. “We have definitely had some challenges with volume this year,” he said. “The upshot is that it presents some favorable market opportunities that should extend through the winter. In the grand scheme of things, this should be a very good year for Northwest onions.”

Washington:
Larry Denke with CSS Farms/Agri-Pack in Pasco told us on Nov. 15 that prices were holding steady at $8.50-$9 on jumbo yellows and $5.50 on mediums, with demand on the mediums up a little during the week. He said the Thanksgiving pull resulted in “good demand for everything,” and he said quality with his yellows was good. The darkest cloud, he said, is transportation. “Trucks are horrible, and that’s slowed down movement.” The Christmas tree season has kicked in, adding to the shortage. Larry also said he anticipates prices to go up after the first of the year.

Harry Hamada with Walla Walla River Packing in Walla Walla said his operation was shipping hybrid yellows, most of which were from the Tri-Cities area, as well as sweets from Peru. Harry said most of the area’s growers had seen good sizing, and the shed was busy with Thanksgiving demand.

Larry Bauman with L&L Ag reported on the status of storage harvest for his operation during the PNVA conference on Nov. 15. “We have been very fortunate in this region,” Larry said. “We ended up with close to normal yields, and even though we have more mediums than normal, overall the sizing turned out quite good.” Larry said quality is nice, and he added, “Right about now, we can tell if we have a crop that will make through April, and we are good to go.”

CROP
Washington:
Harry Hamada with Walla Walla River Packing and Pacific Agra Farms in Walla Walla told us on Nov. 15 the overwinter Walla Walla onions were planted in September and have emerged. “We’re close to 50 percent planted for the crop,” Harry said, adding that spring transplants make up the remainder. “They will go in during March,” he said. The emerging onions look good, and Harry said good winter conditions – including insulating snow – will make for a good crop. The Walla Wallas are harvested in June, and the season traditionally runs into September.

Larry Denke with CSS Farms/Agri-Pack in Pasco said the 2018 overwinters are “in and already up.” Larry said if winter 2017-18 is similar to last winter and the region receives good snow, “The onions will be protected and we’ll get a good crop.”

Most Vidalia growers putting 2018 crop in the ground 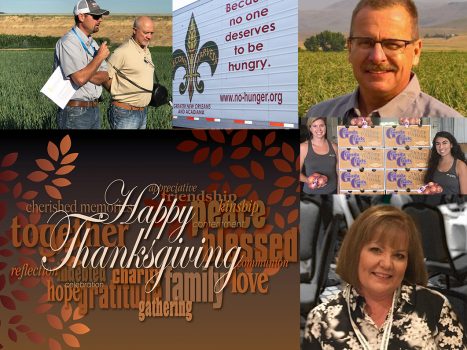 Giving thanks for the bounty we have received