Most Vidalia growers putting 2018 crop in the ground

Although Hurricane Irma got Vidalia growers into the fields slightly later than normal, recent warm temps have helped, according to our “boots on the ground” source Cliff Riner, who is the area onion agent for the southeast district of Vidalia Onion and Vegetable Research Center.

Cliff has been in close touch with the Georgia farmers, and he told us last week that Vidalia growers are in the beginning stages of planting. He said on Nov. 8, “Some acreage is already planted, but most growers should begin by next week. The plantbeds were delayed on sowing due to Hurricane Irma, and we are off to a slightly later kickoff, but it’s been so warm that everything is ready to plant at one time.”

Varieties being planted are primarily those that were introduced two or three years ago, Cliff said. “We have seen a benefit from using them because they can be grown with less fertilizer and have added to the overall quality of a mild onion with an attractive shelf appearance. Seminis Sweet Magnolia and Bejo Macon both are promising varieties that we will see a few acres of this year, and more commercial volumes coming next year.”

Cliff continued, “There has also been a more steady supply of reds and whites coming out of our region, and we have noticed some good performance on some of these varieties in research plots over the past few seasons.”

The 2018 season, he said, should stay the course set over the past few years.

“Overall the Vidalia region will be very similar to the past three or four years,” Cliff commented. “It looks like there will be some producers cutting back on what acreage they are planting, and I think this is tied to the high yields we have experienced in the past two seasons.”

He added, “Last season was completely abnormal weather, so it will be interesting to watch how these new varieties perform this season.

The onion agent said rebranding by the Vidalia Onion Committee has been well received at the grower level.

“I can see the difference in the growers’ attitudes toward what has been done with the Onion Committee,” he said. “Our industry is fortunate that we have a good balance of a historic significance but with a product that still catches the eye of new customers and generations. The growers have invested a lot of time and money in research, and they’re learning about raising the bar of the product they are growing.”

He said, “I think we will be able to do even more in coming years with promotion. We are still trying to feel out just how good these new varieties and research developments are.”

And on the tech side of the Vidalia equation, Cliff said, “We are looking forward to trialing the PlantTape machinery that Tanimura and Antle owns. A group of growers and myself went to see it five years ago in California, and we have the machine here and will be conducting trials over the next few weeks.”

As that new equipment is checked out, the region will “continue to investigate planting with sets, and will be trialing a JJ Broch planter that was developed for our bed pattern. These are both very huge undertakings and we are thankful for the investment from these company,” Cliff said. 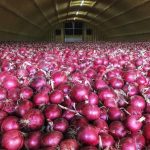 Market and Crop Update for November 16