Market and Crop Update for October 19

Like tens of thousands of other produce industry professionals, OB’s staff is in New Orleans this week for the 2017 PMA Fresh Summit. We’ve been on the fly, but we’ve also reached out to onion folks in key production areas across the country for reports, and we thank you all for your input. Look for us to be back next week with a comprehensive look at market conditions, the latest news on crops going into the ground for the next season AND a wrap-up of the show in the Big Easy!

Jon Watson with J.C. Watson Packing Co. in Parma, ID, told us on Oct. 18 that demand is very good this week. “We have been packing at about 75 percent of normal capacity because we are concentrating on completing harvest,” Jon said. “We have had some great weather opportunities, and end of harvest is going well.” Jon said Watson Packing is very optimistic about the season. “On the finish of harvest, we are seeing some good sizing – much better than we had expected. We extended our growing season, and it looks like the decision is paying off for quality and size. While we are a little down on overall yields, the crop looks close to normal, and we don’t have as many mediums as originally anticipated. But the mediums, like the rest of the crop, are beautiful and have gorgeous tight skins.” Jon reported that Watson has worked hard to make sure the onions store well for the season. “We’re taking the time to dry the onions well so they will also store well,” he said. Jon said the market is steady. “The bottom line is that demand is good, quality is excellent and the market is good too,” Jon said. “We have every reason to be excited about the season.”

Chris Woo with Baker & Murakami Produce Co. in Ontario, OR, report to OnionBusiness.com on Oct. 18 that Baker & Murakami should be complete with harvest by the weekend. “We have had absolutely perfect harvest weather this week,” Chris said. “It is expected to rain over the weekend, but we should have harvest complete by then. The onions coming in are just beautiful, as great a quality as I have ever seen.” Chris said the market is steady. “Once we get all of our inventory in and assess volume, we will be in a better position to estimate how the market should sit for the rest of the season. For now, we are pleased.” Chris said demand could slip toward the end of the week due to PMA. “If we end up quiet toward the end of the week, that will be no big deal. The week of PMA demand usually slips.”

Nevada:
Cindy Elrod with Peri & Sons in Yerington told us harvest is nearly complete in Nevada. “The last of our crop will all be in storage by Monday. Storages are full. The later varieties fared better than the early varieties with larger size and a better yield being the result. We are experiencing a little higher shrink this season and from talking with growers from the Northwest, it sounds like they are experiencing the same. Pricing is strong for reds and whites and will remain strong. Whites have the most opportunity for a notable upswing in price up due to fewer supplies in North America and a global shortage of whites (according to our sources),” she said. Cindy added, “ Yellow pricing has been at higher levels that we don’t typically see during harvest. The past couple weeks we’ve seen the demand and price for yellows soften a bit, but once all areas are in storage, we think we’ll see pricing level and inch upward as we move through the season.”

Utah:
Don Ed Holmes with The Onion House in Weslaco, TX, said his Corinne deal is excellent. “We had a really nice week with the Utah deal, and we’re seeing really good business,” he said. “Trucks are better in Utah than in Colorado – they’re doing a very good job with transportation there.” 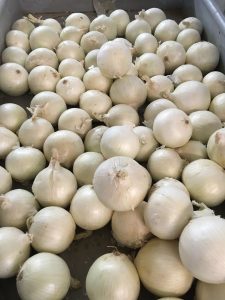 Colorado Western Slope:
David DeBerry with Southwest Growers in McAllen, TX, told us his Colorado deal is going well. “Storage harvesting has culminated in Western Colorado. Growers’ reports indicate that this is the largest volume stored in more than a decade,” David said. “We’re very happy with the direct harvest packing as well. We have about a week left of intermediates to wind up that part of the deal. Storage should last until early February, and all three colors are in very good condition with mostly larger sizes.”

Don Ed Holmes with The Onion House in Weslaco, TX, said his Western Colorado deal is moving right along, with about 90 percent of the crop in. “We’re running intermediates and should finish them early next week,” Don Ed said. “Movement has been very, very good. Trucks have been a little tight but getting better.”

CROP
California:
Gerry Valois of Western Onion in Camarillo reported on the harvest progress in King City and planting in the Imperial Valley as well as Phoenix, AZ. He said harvest is winding down in King City. “We have about two weeks to go in King City. We are starting to plant the Imperial Valley, which is a little early, but most growers are beginning their season,” he said. Gerry said that the Imperial Valley program will be about the same as last year. “Usually all the plans for planting are decided in June or July. Speaking for us, we will have the same program as last year.” Gerry also noted that planting will start in Phoenix at the end of the month.

Texas-RGV/Winter Garden:
David DeBerry with Southwest Onion Growers in McAllen said on Oct. 18, “South Texas didn’t really get full steam going until the past five or six days. All growers are planting now, and we expect to be completely caught up by end of next week. Total acreage probably will be up somewhat over last year.” David added about Winter Garden that the area “should start planting on schedule around Nov. 15. We’ll have a fair increase in acreage there, as well.”

Don Ed Holmes with The Onion House in Weslaco said his growers started planting in the Rio Grande Valley on Oct. 17. “There’s some rain in the forecast for the weekend, but it’s not expected to be anything serious,” he said. “We expect to be finished with this planting around Nov. 15, so we have about another month. We have a planting plan for every variety, and the earlies will come off late March to early April.”

Mexico-Tampico:
Don Ed Holmes with The Onion House in Weslaco said planting will go on for another week in Tampico. He said, “It’s been going really well. The weather has been very good, and the onions should start shipping the second or third week o January.”

David DeBerry with Southwest Onion Growers in McAllen told us on Oct. 18, “Tampico direct seed crop is finishing up this week. Transplant acreage will also wrap up this week for us. Total acreage virtually the same as last year.”

Featured Images: this week’s featured image and the inset image of whites is courtesy of David Deberry. Whites and Yellows in storage at Coal Creek Produce and Hines Farms, Colorado Western Slope, Oct 2017