The blazing speed of technological advancements touches virtually every aspect of life in the 21st century, and in fact it’s the basis for one of our favorite questions:

What tech changes have you seen in your company over the past year?

And without missing a beat, the onion industry’s players, from smaller to mega, are responding with information on new farming methods, new packing equipment, new communication systems and new personnel who speak AI/tech language flawlessly.

It’s a brave new ag world, and we get the feeling we ain’t seen nothin’ yet.

Street cited several pertinent statistics, including the fact that while during Q2 of 2017 the Midwest accounted for a surprising 1.4 percent of venture capital deals and an even more surprising 0.3 percent of deal value, “major agribusiness companies are beginning to spend big bucks buying tech start-ups and funding research and development shops in Silicon Valley.”

Street went on to reference Monsanto’s 2013 buy-out of San Fran’s Climate Corp., which uses “analytics and the Internet of Things to calculate crop insurance risk profiles in 100 milliseconds…” After the calculation, Climate Corp./Monsanto “names a price, and insurance acts as the policy underwriter,” the article continued.
In other ag advancements over the past year, John Deere equipment company paid more than $300 million for Blue River Technology, a robotics expert, and DuPont paid a similar sum to buy “San Francisco-based agricultural analytics software firm Granular, Inc.”

Agriculture itself ranks, according to Street, as the “19th largest industry in America, with an average of about $400 billion in revenue for each of the last three years.” This year, Street wrote, “The industry’s expected net revenue is expected to hit $63.4 billion this year, or a 15.5 percent return on revenue. In 2013, net revenue was $123 billion, or a stunning 30 percent return on revenue.”

One has to wonder if the Founding Fathers had this in mind as the nation was birthed 241 years ago. Street observed that farmers were “the original American entrepreneurs,” venturing off to unknown areas and unknown conditions to work with the technology of the times in their quest for not only sustenance but also profit.

Along the way there have been speed bumps, with a diminishing workforce key among them. Street cited a farm workforce of 3.5 million at the end of the Revolution – and that was practically the entire population of the infant United States.

During World War I there were 32.1 million American farmers, which made up about a third of the country’s workforce. But the decline over the past century has been staggering, Street wrote, to the point of “only 6 million members of farm and ranch families,” a meager 2 percent of the U.S.

What has caused the incredible shrinking labor force? Street said it’s the “use of technology that allows each farmer on America’s 2.1 million farms to feed 165 people.” And, the author continued, “As a result, the industry feeds America and still generates $135.5 billion of exports, about one-third of production.”

One of the most telling of Street’s stats is the number of Millennials who are farmers – more than a quarter-million of them – who are not only full-time but also part of the “tech-savvy generation is looking to engage in scientific farming that will include the drastically better use of energy and water, leveraging themselves with drone equipment; and selling directly to local consumers to grab back a big percentage of agriculture’s net revenue losses.”

And as Millennials drive the bus. According to the AgTech Investing Report that Street used, ag-tech and food start-up deals in 2014 amounted to $2.36 billion. That number doubled the next year, up to $4.6 billion for just under 500 deals. In 2016 the number of deals went up, but the monetary value decreased slightly, down to $3.2 billion.

We are not surprised at all to report Street’s findings that “the hottest ag sectors were food e-commerce; precision agriculture and irrigation; and water technology.”

Stay tuned, because tech and AI are here to stay. 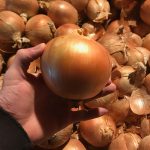 Market and Crop Update for October 19