MARKET
New York/Canada/West
Rick Minkus with Minkus Family Farms in New Hampton, NY, told us Oct. 3 Minkus is shipping some onions out of the West and Canada while still working on harvest in New York. “Demand and the market for the stuff we’re bringing in has been steady,” Rick said. “And while the quality is very good out of both regions, the Canadian size profile is extremely small. Canada was dry, and their onions didn’t get as big as normal.” Rick said the New York harvest is behind schedule. “To say this New York harvest season has been horrible is an understatement,” Rick said. “Orange County has had 30 inches of rain since August, and when it rains, it drops two and three inches at a time. It rains every Tuesday and every other day in between. We had flooding back in 2011, and it was drier back then than it is now. At least in ‘11, things had a chance to dry out.” Rick said his operation is 50 percent done with harvest. “The weather people say we are expected to get 10 days of dry weather, but I have come to doubt them,” he said. “We are working hard on it, but it’s been so wet, I honestly don’t know how many of these remaining onions we are going to be able to get in here. It’s just an unfortunate situation, but good for the market, I guess.”

Wisconsin:
Doug Bulgrin with Gumz Farms in Endeavor told us Oct. 3 that demand has been good. “Our demand has been exceptional this week,” he said. “We are also experiencing good pricing, especially on medium yellows.” Doug said Gumz is more than halfway through harvest. “We have experienced some rain off and on, so we are only about 60 percent complete. We are working hard to get everything in storage. We did add a fifth harvester to help in that regard. 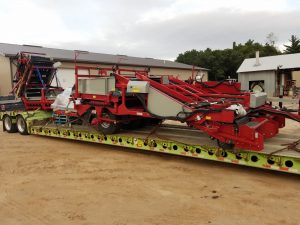 We are currently packing pre-pack and medium yellows and will start with our medium and jumbo reds this week. Quality is looking very good.” Doug added that Gumz hasn’t experienced any issues with transportation, and of course OnionBusiness is always happy to report that news.

Northern Colorado:
Ryan Fagerberg with Fagerberg Farms/Fagerberg Produce in Eaton told us in late September that movement had been a bit slower compared to the past few weeks, but he said that is “typical this time of year.” Ryan added, “We just finished harvest earlier this week (of Sept. 24). I’m happy with the quality, but our size profile is down a little.”

Colorado Western Slope/Utah:
Don Ed Holmes with The Onion House in Weslaco, TX, told us Oct. 3 that Western Colorado is about 50 percent in as of this week. All sizes and colors are shipping, and Don Ed said the market is “about the same this week as it was last week, but overall we’re optimistic to see how this plays out as everything comes in.” Utah is between 60-70 percent in, and Don Ed said, “We’re getting close and need another week of good weather to finish up harvest there.” Utah will start shipping mid-month.

Idaho-Eastern Oregon:
Dwayne Fisher with Champion Produce Sales in Parma, ID, weighed in on Oct. 3 to plead, “Mother Nature don’t ‘Flake’ out on us now! Keep any delays in Washington DC!!!!” He continued, “This morning I looked in the mirror and almost slapped myself – is harvest really almost over on Oct. 3!? There was no dream I needed to wake up from – the end is in sight. Matter of fact many of our growers are finished. It has been a beautiful fall for curing and harvesting onions. This week is finally starting to actually feel like fall, with cool and rain in the forecast, and we are about a week away from being wrapped up with our 2018 harvest. We may get delayed a few days if the rain does indeed hit, but we are still way ahead of schedule.” Dwayne compared 2018 with 2017, saying, “Last year was a miserable harvest and we finished on Oct. 30, so getting done before the 15th will make us want to do the happy dance! The crop is absolutely gorgeous, like super model caliber but much more voluptuous and curvy. It’s one of the best looking crops I have seen in my short 19 years in the business.” And he said, “Storability should not be an issue, so meeting the eager demands of our customers to extend our season should be attainable.” Dwayne continued, “This week it has been quieter than we have seen on the market side of things. We aren’t surprised though. With some deals offered right out of the gate on Monday, we figured it would be slower for us. Nothing slows down demand like lowering prices. Hopefully, this is just an end of harvest sale, and things will strengthen some once everyone is under cover.”

Ashley Robertson with Fort Boise Produce in Parma, ID, told us Oct. 3 harvest has about three more weeks before finish. “The crop looks really good,” she said. “There’s good sizing and quality.” Ashley said Fort Boise has been moving all sizes and colors, with jumbo and medium yellows seeing the strongest demand. She commented that this week has been quieter this week than the past few, but she noted that’s not unusual for this time of year.

Chris Woo with Owyhee Produce in Nyssa, OR, told us on Oct. 3 Owyhee is “conservatively 75-80 percent picked up.” He said, “There are some big sizes being put away, and it’s very good quality. It’s really some of the best onions I’ve seen being stored in a long time.” Owyhee is shipping all sizes and colors, and Chris concurred with his Treasure Valley neighbors that the market is “a little weaker this week.” Transportation, he said, is “tough and expensive.” But he said Wednesday was “a clear and beautiful day, and we couldn’t ask for better storage weather.”

Grant Kitamura with Baker & Murakami Produce Co.in Ontario, OR, reported this week on the status of the storage crop both for Baker & Murakami and for the region in general. “Our operation is about two-thirds complete,” he said. “There is rain predicted for the weekend, but that really is not a huge concern. We are on track to finish around Oct. 15.” Grant said the Treasure Valley is looking at a normal size crop this season. “We have a larger crop than last year, but I would say it is definitely not like two years ago,” he said. “I have a pretty good feel for it, because we have growers that stretch from one end of the valley to the other in both Idaho and Oregon, and I have had a chance to look at a lot of fields. From what I’ve seen, there was a wide variety of stands that produced an equally wide a variety of yields. Some fields came in with high volumes and some with extremely low volumes. Of course, timing is everything when you are evaluating stocks on hand, but we should have enough to adequately take care of our customers for the season. I also want to add, no matter what the yield size is, previous reports are entirely true: This crop has excellent quality! There is no doubt about that.”

Oregon:
Trish Lovell at Curry and Co. in Brooks said on Oct. 3, “We have finished harvest here on the Westside. We had very minimal weather issues to deal with this year. Normally, we are fighting the rain and hurrying to get all under cover.” Trish went on to say, “Movement has been good, especially on reds. Yellows and whites are a bit slower. Yellow movement slowing down has much to do with harvest. Once all the onions are in storage, we should see pricing and demand firm up.”

Broker’s Perspective:
Jason Vee with Vee’s Marketing in Superior, WI (OB: It’s much easier to spell than Lake Nebagamon…), came in with this report on Oct. 3: “It’s our first week in our new office in Superior, WI. That’s been a challenge. I had a lot of trouble switching the phone lines, even though we did all the infrastructure a month ago. On Sunday this week, while talking with the person handling my fourth request in three days to switch my lines over, I started to lose my cool. He says to me, ‘Mr. Vee, it looks like we have tried to reach you several times.’ I reply, ‘Are you trying to call me several times on the exact line I keep requesting to change over to a new physical location?’ There is a long pause and he mutters, ‘Well, this is embarrassing.’”

Jason added, “On the onion front, yellows are the weakest. During my day-to-day, Washington is blaming Idaho and Idaho is blaming Washington. I did hear a stupidly low number on a delivered jumbo yellow to New York that I couldn’t honor if I started with $0.00 FOB. But those are harvest deals. Places get long, and sometimes that requires open sales.”

He said, “Medium yellows seem to be moving better than jumbo yellows. That gets attributed to the fair demand for consumer packs on mediums, but also some sheds are coming up with more size in the Northwest than they are used to. So, we are seeing more jumbo yellows than medium yellows in the profile.” And, he said, “There was a slight downward market correction on whites. Otherwise, reds, whites and sweets are stable for now.”

Mexico:
Don Ed Holmes with The Onion House in Weslaco, TX, said the Tampico, Mexico, planting continues. “Our guys are getting close to finishing planting,” he said. “They’ve had some showers there.” He noted, “All those onions are generally February and March sweets.”