Now in its 12th generation on American soil, the Torrey family of Torrey Farms in Elba, NY, holds several distinctions, not the least of which is that it has been farming in this country for more than 300 years.

According to the operation’s web site, www.torreyfarms.com, the family left England in 1626 “because of disagreements with the church.” Initially the Torreys settled in Connecticut and then made their way west in search of better soil. No offense, Connecticut.

John Torrey and his family arrived in Genesee County, NY, in 1803, and planted roots, both figuratively and literally.

Today the farm consists of more than 12,000 acres across five of New York’s western counties, and there are 10 family members involved in the planting, growing and selling of multiple commodities, including onions.

Maureen Torrey, who has been in the sales and marketing arena of the business for nearly 40 years, told OnionBusiness.com other family members are also involved in that aspect.

“My niece Shannon Kyle is also doing sales,” Maureen said, adding that Carol Torrey on the sales team as well. And working them are Shannon’s father, Mark, and her uncle, John, both of whom are Maureen’s brothers and both of whom handle farming operations. In addition, Mark’s children Molly, Travis, Jordyn, Lucas, Jed and Maxwell are involved in other aspects.

Maureen told us the farm practices integrated pest management, saying, “In order to have a crop and to take care of the soil, you have to do that.” She said, “We always use environmentally friendly applications.” 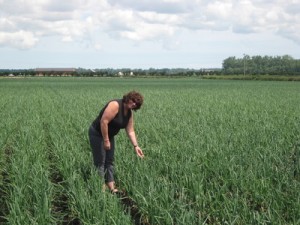 What’s more the farm packs only what it grows itself, thus “making it a very clear channel to trace our produce forward to the customer who receives it and back to the field it was harvested from and to the employee who harvested it,” as stated on the website. Sustainability is key, and the farm is also committed to food safety through GAP certifications.

The location of the farm is a very real advantage, Maureen said. And the website explains, “Our location in New York State allows us to get to 3/4 of the U.S. population over night; meaning in many cases, produce that we pick in the morning could be on a store shelf that afternoon or the following morning.”

Of course 40 years in sales has given Maureen a keen perspective of how business is conducted, and she’s seen significant changes over the decades.

The biggest, she said, is how people communicate. “It used to be very much a people business. We’d talk, get to know each other, get to know about each other’s families,” she said. “Now the majority of sales and business are done over the internet. Sometimes we don’t even talk. We have photos instantly, and we’re always accessible. It’s 24/7 now, and sales take place at all hours of the day.”

And technology won’t slow down, she said. “There will be more use of computers, and I know the buyer will be able to see onions being packed in real time.”

Torrey Farms is keeping pace, thanks to the passing down of knowledge “from seed to shelf.”

Onion sales are to what Maureen calls a “nice balance” of retail, foodservice and repackers. “We’ve always had this mix,” she said. “We need all of them to successfully sell onions.”

Volume is heavy to the yellow onions grown in the muckland, and Maureen said this year the farm will see more mediums as a result of dry weather during growing season.

Quality is good, and she said, “We grow good cooking onions with flavor.”

As of Sept. 13 harvest was at the halfway point for both reds and yellows, and Maureen said Torrey Farms has been shipping since early August and will go through June.

She said the packing shed has added efficiencies to match onion volume, with automated weighers and baggers. For retail, onions are available loose and in 2- and 3-pound bags, foodservice has 50-pound bags.

“All of our practices are sustainable,” Maureen said, noting the result of that ethic is evident in the number of generations that have been a part of Torrey farming. And the family adheres to another code, that of doing unto others.

“We offer benefits to our labor forces,” she said. “We use both H2A and domestic workers on our farm.” 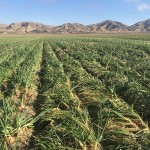