In addition to Paul receiving recognition from the stands, Paul was happy to report that the Broncos prevailed over his northern onion growing neighbors’ favorite, the Washington State Cougars, in a close battle, 31-28.

During the game’s third quarter, Boise State University paid special tribute to Paul, recognizing him as the Bronco Athletic Association Member of the Game.

Skeen is a longtime association board member, and he’s been part of the body overseeing the funding and creation of opportunities for student athletes through a variety of programs, including the BAA Athletic Endowment Scholarship, as well as through athletic capital projects. For more information on the BAA, visit its website at http://broncoathleticassociation.com/.

A photo of Paul and his family, naturally taken in an onion field, was shown on the stadium’s Jumbotron as part of the recognition of his contributions, and Paul told OnionBusiness.com he was very pleased at the response – he said fellow onion industry members were texting him to congratulate him from other stadium seats during the program.

Skeen also told OnionBusiness.com he feels it’s important to give back to the community through service. To that end, he has served on the Malheur Co. Growers Association board since 1986. 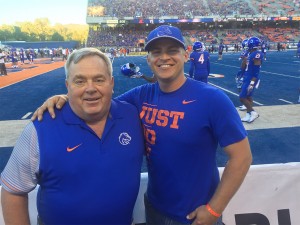 “Being on the BAA board not only allows me the opportunity to be closely involved with a college athletic program that is made up of teams my family and myself enjoy watching, but it also provides me an avenue to promote the university while raising awareness for the region’s agriculture industry,” he said.

Paul continued, “Everywhere I go while serving as a BAA Board member, I am always mindful of the responsibility I have to educate and raise awareness of the Idaho and Eastern Oregon’s agriculture – especially given we are considered the onion capital of the United States.”

When asked if he considers himself an ambassador of the industry, Skeen replied, “Well, I am not sure about that, but I do know that I am thankful that the onion industry and agriculture in general has served my family well and I want to give back.”

As for the Northwest’s football rivalry, Paul will be cheering his team on as the Broncos travel to Corvallis, Oregon on September 24 to play their next game against the Oregon State University Beavers, the alma mater of many of his friends and neighbors.

Obviously, OnionBusiness.com will not be picking sides. 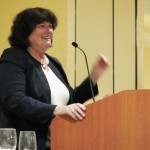