A request by the Malheur County Development Corp. has been sent to the Oregon Transportation Commission requesting $1.3 million, or 5 percent of the legislatively approved $26 million, for continued work on the planned truck-to-rail transportation hub planned for the Treasure Valley.

A 400-acre site located in an industrial zone and on the Union Pacific main line in Nyssa, OR, has been proposed for the facility, and according to the pre-proposal sent to the ODOT, certain infrastructure components such as water and wastewater services are readily available. Additionally, the facility has been named the Treasure Valley Reload Center.

He said the main purpose of the document is “to demonstrate to ODOT that we have an organizational structure in place to successfully develop a facility.” Smith added the proposal was also to include a high-level general business case, and he noted, “The location of the facility on the site is not finalized. At this time, the layouts in the proposal are conceptual in order to provide ODOT with a visual of what a facility might look like.”

Explaining that “some of the ODOT commissioners or staff may not have seen a Railex type facility,” Smith said that the facility location and layout might change as discussions continue with growers, packers, shippers and the railroad. Other factors might also become relevant as the project continues, he added.

When the $1.3 million is approved for allocation, Smith said it will take the project further into the planning process, funding market analysis, land acquisition agreement, surveying and mapping, preliminary engineering and other necessary steps to ready the site for construction.

He said the 5 percent will enable the development of a project plan, and the proposed timeline put forth in the pre-proposal is for work to begin “in earnest in early January 2018, with the goal of beginning initial construction in the fall of 2018.”

The document says, “Construction would continue through the winter and spring, and into summer of 2019.” 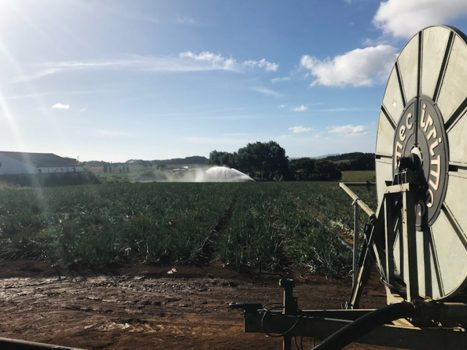