A minimum wage increase affecting 21 states nationwide will, to varying degrees, impact several onion-growing regions in the United States this year and in coming seasons.

The increases, some of which went into full effect on Jan. 1, some of which will kick in during the year and some that are written to increase annually over the next several years, range from a few cents per hour to nearly $2 per hour.

Proponents of the raise pointed out living expenses have risen; opponents countered with the cost to businesses the increase will have and the likely higher cost in products/services to counter that.

In the onion industry, minimum wage increases in Oregon, Washington, Arizona, Colorado, California and New York are of particular note.

According to a Jan. 5 online New York Times post athttps://www.nytimes.com/interactive/2017/01/05/business/economy/state-minimum-wages.html?_r=0, “In states with higher proportions of workers in low-wage jobs, the minimum-wage increase will have an effect.” The post goes on to provide a map showing the states’ raises and the “[d]irectly affected workers as a share of state’s wage-earning workforce.”

In his post on Dec. 22, 2016, as The Motley Fool at http://www.fool.com/retirement/2016/12/22/2017-minimum-wage-increases-these-21-states-are-pa.aspx, analyst Dan Caplinger examined the issue in depth and concluded, “For those who earn the minimum wage, any boost to pay can be a game-changer, and those who live in the states listed above will celebrate the pay raises they get. Nevertheless, the debate over whether minimum-wage increases are positive or negative for the economy as a whole is likely to continue not just in 2017 but for years to come.”

When OnionBusiness.com asked for comments from the onion industry, Paul Reeping with G Farms in Litchfield Park, AZ, responded, “On Jan. 1 Arizona experienced the largest single increase in the minimum wage of all states affected this year. This will no doubt impact our cost of doing business. Basically, we are going to have to assess the way we address labor and where we can save in order to stay competitive and maintain the high quality we’re known for. Obviously, our onion operation will feel the hit, but it’s going to be a real eye-opener in general for the state of Arizona since it’s a big tourism state with a lot of service industry businesses that are going to have to raise prices to keep viable.”

In Northern Colorado, longtime grower/shipper Bob Sakata of Sakata Farms in Brighton, CO, said, “I voted no on it. But I respect the majority that voted yes. It’s close to a 7 percent increase. If you look at the fast-food industry, they’ll raise their end prices, which could harm society in the long run. But in agriculture we can’t raise our end prices. When we get an increase in minimum wage mandated by the government, we have to eat it. It hurts us in ag. The key thing is we in this industry have no control on the price of our end product.”

Also speaking about the impact in Colorado, where he handles onions for Western Slope growers, Don Ed Holmes of The Onion House in Weslaco, TX, said, “I don’t know what the answer is. I am sure the wage will go up here in Texas at some point. But I do know big increases in the minimum age are not pro-business. We have one McDonald’s here in this area that doesn’t have a person you talk to. You talk to a machine. And that’s what it’s doing – it’s bringing on more automation.”

In Nyssa, OR, Kay Riley at Snake River Produce weighed in. Kay was among a group that “worked hard to make this as palatable as it is,” he said on Jan. 18. He explained that Oregon’s minimum wage is three-tiered depending on location, with urban wages higher than outlying regions. In Nyssa, he said, “We’re at $9.50 and will go up in July. We got hit twice last year, and from our [cost of doing business in the industry] perspective, it’s difficult because we’re within 500 yards of Idaho where the minimum wage is $7.25.”

On one hand, Kay said, Oregon does have “first choice on employees, but right now on both sides of the river there’s a labor shortage, and we desperately need labor. What we really need is a legal guest worker program.”

Washington’s minimum wage increase of more than $1.50 per hour prompted Larry Bauman at L&L Ag Produce in Connell to tell OnionBusiness.com, “The last election in Washington was a rough one for small businesses that do not have the ability to raise their prices to cover the laws that were passed. The new minimum wage law passed, which also contained mandatory sick leave for all. We were planning on a $9.63 per hour rate until the new law changed that to $11 on Jan. 1 with a cap of $13.50 by 2020. After that the rate will be tied to the cost of living scale.”

Larry continued, “What happened at our facility was that almost all of our employees were over the $11 already. Our concern is that many people want the same percentage increase applied to their wage rate. The sick leave deal does not start until next year and may have some legal challenges before it is in acted.”

He said, “The federal change in the base rate of people paid as managers is a real issue also, although it is on hold now. The changes on the managers’ duties will cause many problems. All this filters down to the farms and to the labor contractors that provide needed workers in the production areas.”

What’s more, “In our operation there isn’t a lot we can change, as we have already added internal camera systems on our line and upgraded our facilities. One thing for sure is that the onion business can not survive with the prices that have been going on this season combined with these new laws.”

Brenden Kent at Sunset Onions in Prosser, WA, added, “What some seem to forget is that the people that have been with us for five years that are making $11 now. They are going to want increase, and they deserve it. So the impact is not only going to be felt from increasing pay for entry level workers, but adjusting the wages for those that have been loyal and steady employees.”

Don Ed Holmes said, “If they let supply and demand take care of the situation, it would.” 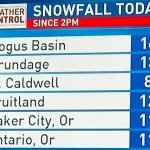