Move over, Travelin’ Gnome. Travelin’ Onion is on the go!

Back in the 1970s, when dinosaurs ruled the earth and the phrase “social media” hadn’t been conceived, there was an entertaining craze afoot around the globe involving yard gnomes.

The premise was simple but oftentimes involved thievery: Snag a yard gnome from someone’s garden, take that gnome on a long-distance trip and send the owner photos. If at all possible, get those photos published in People magazine or other print media.

So much fun! And the tomfoolery continued for decades, with thousands of people worldwide getting in on the game and waiting with bated breath for the next weekly issue of People to show where Bilbo had been spotted. It might surprise you, but there are actually a fair number of gnome-snatchings yet today, and in this age of hashtags and Twitter/Instagram/Facebook/etc.etc.etc., Bilbo’s whereabouts are known instantaneously rather than days after he was photographed.

That long backstory leads us to a great suggestion from Cain Adams, our logistics columnist, who recently commented, “I was wondering if persons in the industry would start posting vacation pictures with an onion in them? Could you imagine how much chatter 3000-5000 posts a week could create?”

OnionBusiness has its #OnionBiz, and we keep onions front and center in our social media posts with crop photos, people in the news, awesome recipes and industry updates. And Cain noted, “Posts of onion fields are awesome, for the onion nerds we are, but if we involved personal opportunities maybe it would increase mindspace to the regular Joe?”

He ran this idea up the onion flagpole: “Maybe an onion pic of the month would stir it up a bit? Personally, I will be asking my kids to pose with an onion. They think it’s hilarious.” And Cain himself “can’t wait to surf Waikiki with an onion in hand and a GoPro strapped to my head in May.”

We love all things onion, and we also really love keeping a positive, happy attitude.  So with the New Year comes a new invitation: Game on! Let’s see your Travelin’ Onion photos! 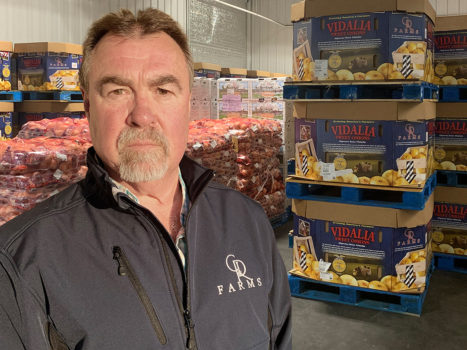