Though he’s no stranger to Georgia ag and its onion industry, Mike Sutton is wearing a new hat in 2020, that of Operations Manager at G&R Farms in Glennville. Sutton joined the company as temporary operations manager earlier in 2019, bringing nearly 40 years’ experience with the Georgia’s Federal State Inspection Service to the position.

“Michael is certified by the USDA to inspect any vegetable or fruit that is grown anywhere in the world,” Dasher said. He added, “He has an incredible amount of experience in the produce field and, just as important, he has managed hundreds of employees while providing training and oversight.

As part of the management team, Mike “will provide invaluable experience that will help us maximize efficiency and balance objectives to ensure quality control and food safety are job one in every aspect of operations,” Walt said. Because G&R is a year-round supplier of sweet onions and ships Peruvian and Mexican product when Vidalias are not in season, Mike’s background as an unrestricted and licensed USDA inspector “will ensure that our onions meet the highest standards in the onion industry,” Walt continued.

Mike, a native Georgian who grew up in Wilcox County, started his career in produce inspection in the late 1970s. He said, “I started inspecting peanuts, apples and peaches in Georgia in 1979.” He also inspected tomatoes and vegetables in Florida, and he said, “I started doing onions in 1995, first as an inspector on fresh and imports and then as a supervisor from 2000 until July of 2019 when I retired.”

Like many in the state’s produce industry, Mike came from a farming family. “I grew up working watermelons and cantaloupes in the Cordele area,” He said. “From the time I was eight years old I was loading them in the fields and at market.” And, he said, “There has been a Sutton working with USDA since the early ‘60s, so I migrated to that work. I always knew I wanted to work in produce, doing something different every day.”

During his long career with Georgia’s Federal State Inspection Service, Mike earned certification as a produce inspector and auditor by the USDA. He served as a district supervisor with a broad range of responsibilities, including personnel recruitment, training, performance and scheduling. And he conducted numerous audits on growing and packing facilities around the state.

That attention to detail and dedication to work have been passed on to others. “I have worked with and trained hundreds of inspectors over the years and have worked in packing houses all over the United States, which I think will help bring a new perspective and hopefully some new ideas to the [G&R] table,” Mike said. His goal is “to improve overall quality while at the same time making sure good product is not going out the cull line.”

Years of experience are sure to come in handy: “I am also trained as an auditor, so hopefully I can help improve our overall ratings on audits and bring a fresh eye to the way we are doing some things.”

Move over, Travelin’ Gnome. Travelin’ Onion is on the go! 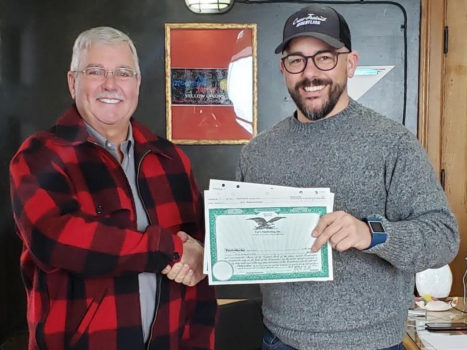