Recently a 12-member contingent from the National Onion Association traveled to Washington, D.C., and met with members of Congress and other government officials. By every account, the trip accomplished much, with the Association able to drive home concerns and issues that affect the onion industry.

In its June/July newsletter, the NOA noted, “The group of members from the National Onion Association drew some quizzical brows this week as they knocked on doors and sat with legislators and policymakers.

“And that may have helped their message resonate a little better than it has in years.

“While much of the country has settled in with the COVID-19 virus and its effects, the Washington advocacy storm from the nation’s industries has tapered off to a big gaping nothing.”

NOA President Doug Bulgrin was quoted in the newsletter, saying, “I think it was great timing. The NOA group was the first that many agencies had met with since the pandemic began, and they were very eager to be back to work.”

He added, “Being the first and only group back to D.C., you can be sure that our issues will not be lost in a sea of other topics.  We were having follow-up calls already when we returned, a great sign of our effectiveness.”

The newsletter went on to note that 2021 is the second year for a NOA contingent to take part in the Washington D.C. Fly-In. “This year, several new attendees helped deliver several messages to their individual Congressmen and Congresswomen, as well as to the USDA, PACA, AMS and USTR. They discussed a variety of issues regarding trade and imports, funding and research, and transportation,” it said.

And, the newsletter said, “The entire country is facing a truck driver shortage like none other, and shipping costs are going through the roof as fuel and implement prices continue to rise. That will remain a large topic of discussion moving forward, especially at the upcoming summer convention.”

Yielding cited as saying the group effort “was most successful because members from a variety of states came in a united front.”

He said, “Without everyone from the different states working together our voice won’t be heard. We can’t get this done individually.”

And Bulgrin said, “I would like to thank all of those who participated. It is great to have a new group come to D.C. and see what we can accomplish as a national organization.”

Jared Gutierrez with Columbia Basin Onion in Hermiston, OR, was among those who went to Washington, D.C., as an NOA member, and he provided OnionBusiness with some insight on the trip as well as the group’s goals and objectives for the trip.

“Our group had a specific set of issues that we wanted to address in our meetings,” he said. “One of the top concerns we addressed was about imports, primarily those coming from Mexico, New Zealand and other areas where onions have shipped higher than normal volumes –- particularly this last year when the U.S. onion industry lost sales outlets like foodservice during the pandemic.”

Jared continued, “Some people may not know this, but the U.S. has gone from a net exporter of onions to a net importer of onions. Recognizing that the anti-dumping route is a hard one to take with this issue, we approached the topic in our meetings from the standpoint of food safety. U.S. growers are held to a high standard, and our government should be holding importers to those same high standards. So we talked about the Foreign Supplier Verification Program and what could be done to institute the appropriate level of enforcement.”

In addition to the import issue, Jared said the group addressed the importance of Federal Marketing Orders. “We shared with the legislators we visited with the important role Marketing Orders play when it comes to imported product. Specifically, we encouraged the legislators we talked to help the industry keep the South Texas Marketing Order in place in order to protect less than #1s being imported from Mexico during the South Texas onion season. We also talked about the federal Food Box Program, and from our meetings, we understand that there is another program in the works. It will most likely run through food banks, but there is a new version being worked on that could benefit the industry.”

Jared and the NOA group also discussed labor. “As many may know, the NOA supports the Farm Workforce Modernization Act,” he said. “And while the H-2A program is a benefit, the group did talk to our legislators about trying to get some wage relief. It makes it very hard to compete with importers when their labor costs are so low and labor costs under the H-2A program are escalating. The group also took time to ask our legislators to help us with our request for an additional $20 million for funding under the IR-4 Project for the necessary research needed for pest management solutions to keep the future of our crops viable.”

Jared said the trip was a great start, but more from the industry is needed.

“This trip was a great step to start the dialogue on some very important issues facing our industry,” he said. “But we can’t stop now. If we don’t all stand up, speak out and talk about these issues, we won’t be able to protect the future of our industry.”

Jared told OnionBusiness that if industry members are looking for more information on these issues, they can reach out to Greg Yielding at the NOA, and he would be more than happy to assist them.

Also making the trip was Cameron Skeen with Baker & Murakami Produce in Ontario, OR. Cameron told us, “I feel like the timing of the trip was impeccable.  Washington D.C. is really just at the beginning stages of opening back up from the COVID shutdown, and we were the first in-person meetings that many legislators and agencies had in well over a year.”

He added, “We were a novelty, you could say, and I think we had more engagement and left a deeper impression because of that.”

Cameron continued, “We covered many topics depending on who we were meeting with, but the topic that seemed to resonate more than any other was trade and the increased pressure we are getting from foreign trade partners, which is changing the face of our industry.”

“Export markets have diminished while imports continue to ramp up at an alarming pace. This will leave domestic producers with some difficult questions to answer for the future.”

Cameron wanted to be sure it was mentioned how much it was appreciated that BASF sponsored the D.C. trip.

Dwayne Fisher with Champion Produce Sales in Parma, ID, was another member of the contingent, and he told OnionBusiness, “We were told at each meeting and the offices we visited that we were the first group to be in D.C. for a year in a half! We caught their attention and should have their focus as not many groups are scheduled to be in D.C. until September.”

Dwayne said, “Republican offices seemed to be manned and accepted in person-meetings. The other side of the aisle, that wasn’t the case. The meetings were very productive, and they were glad to have live people in front of them.  A lot of focus was on the fact that America is now a net importer of onions, and that should not be the case.”

He said, “In particular the increased amount of onions that are being imported from Mexico was a large discussion item.  When we gave them the USDA statistics of 100-200 truckloads coming across each business day, they were surprised, and that over 3,000 additional loads have come into our country over last season – all shocking figures.  Discussions focused around how that added supply devastates the return to our American growers and the increased food safety risk that brings to the country.”

He also said, “In these discussions we discovered that only the importers are being verified and not the foreign growing operations – GAP Audits etc. No actual field audits or equivalent type of inspections are being done, and yet our American growers are subject to these standards and the associated costs.  Moving forward the lack of food safety verifications on these foreign imports at the farm level has to be our focus as an industry, and we need to demand that they live up to the trade agreements (same standards), or these onions are not allowed to cross into the country.”

Dwayne concluded, “We had a great representation of growing areas, and the delegates were very knowledgeable about or industry issues and in particular our growing costs and marketing disadvantages.  In our meeting with the USDA, we thanked them for the extremely successful Box Food Program and encouraged these types of programs for those in need, instead of EBT cards.” 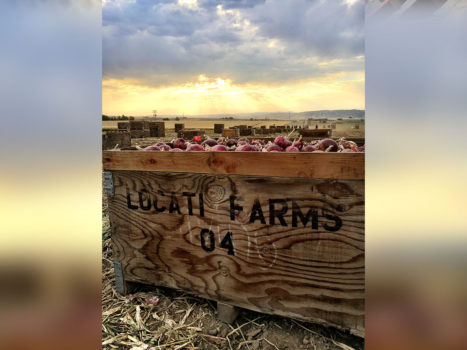