As the Northwest onion industry collectively bids winter 2016-17 a not-so fond farewell and continues to get up to speed after weeks of record snow and ice in December and January, growers are returning to the fields in preparation for 2017.

No one can downplay the impact of the storms, with the Treasure Valley hit especially hard and faced with structure collapses and difficulties moving product during the height of the storms. Washington, other parts of Oregon and Nevada were also hit and saw delays in movement due to highway closures.

But OnionBusiness.com has found optimism intact in Idaho-Eastern Oregon and the Northwest in general, with planting taking place across the region.

“We have 200 acres in the ground now,” Brent said. “We are taking four days to prep, and by next week we will have our final 30 acres planted. We also expect that we will be seeing sprouts within the next week or so.” Brent, who farms ground on both the Idaho and Oregon side of the IEO border, graciously provided OnionBusiness.com with our Video of the Week CLICK HERE.

Kitamura Farms near Ontario, OR, has about 30 acres in the ground now, “with many more acres to go.” We’re told they’re “cranking hard to keep planting.”

In Parma, ID, Fort Boise Produce had not begun planting as of March 15, but Ryan Stewart told us, “We might get into the fields later this week and very likely within the next week.”

Up in Washington Brenden Kent at Sunset Produce in Prosser told us, “We have planters ready to go, and we are just waiting on Mother Nature to quit sending these rain showers through our area.” He said he expects planting to begin in the next “day or two,” and he added, “My guestimate is everyone will be one to two weeks behind in Washington for sure. I have only heard of a few fields being planted up to this point.”

Trish Lovell with Agri-Pack in Pasco said growers had started planting during the first week of March and continued into the wee of March 6. She reported that the overwintered onions were generally in good condition, noting that most of the snow had melted and daytime temps were headed up into the 60s.

Another Washington onion man, Larry Bauman at L&L Ag Produce in Connell, said on March 14, “We have not been able to get into our fields yet, even in the west Pasco area, due to wet and rainy weather with more rain in the forecast for most of this week.” Larry said there has been a significant amount of damage to the county roads and irrigation systems throughout the Columbia Basin area, “the result from the quick melting of the snow we also had in the Basin.”

He added, “In some areas to the north there was drifted snow in the east-west laterals that had to be removed before filling. The result is irrigation water will be late being delivered by a week or so. We will be late getting all of our crops planted but only God knows how they will turn out, and we must remember He is in control.”

Wada Farms’ John Vlahandreas told us Northwest snow “seems to be fading and hopefully it’s enough to get in the fields this month. Time will tell.”

And Dan Borer with Keystone Fruit Marketing in Walla Walla said Keystone’s growers are gearing up to plant their early spring seeded variety crop. “We have had some wet weather, but our growers are putting everything in place and they are ready to plant,” Dan said.

“Generally speaking for the Northwest, this is the time of year when growers are making decisions about acreage. Unlike orchardists who grow tree fruit, row croppers can be flexible about what they plant, and many of them make decisions based on what is currently going on in the market,” Dan continued, “It’s hard to say if this year’s market will impact whether growers will decrease their acres or possibly not plant at all.” 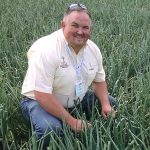