Northwestern distributors donate onions and spuds to help others

If you’ve been feeling a seismic shift in people’s attitudes – truly a180-pivot from the initial hoarding toilet paper, to be sure – you’re not alone. OnionBusiness has been blessed to share stories of human kindness in recent weeks, and it seems to us the return to niceness is spreading.

We heard from Jim Buck this week about a recent event in Washington that was birthed by our pals at the Washington State Potato Commission as a “million-pound spud giveaway” and involves Desert Ridge Potatoes in Moses Lake and good friends of ours in the onion industry, Target AG in Othello.

Jim, who’s a former Washington State representative and a retired structural engineer who also served in the U.S. Army, field artillery, from 1971-76 and attained the rank of captain, lives with his wife, Donna, in the small coastal town of Joyce on the Olympic Peninsula. The couple remains very active in community efforts, and Jim told us, “Several weeks ago, Washington State Sen. Mark Schoesler clued me in on the WSPC’s spud giveaway.”

Jim soon had lined up potatoes in Idaho, and he then, acting on a tip from Sen. Schoesler, contacted Target AG for onions.

“Colleen set me up to get 6,000 pounds,” Jim said. The price was discounted when Jim explained the intent was to donate the onions, and he and neighbor Terry Barnett drove from Port Angeles to Bruce (near Othello) and back on Monday, May 18, for the onions.

“Bill Herman from Hermann Brothers picked up 53,000 pounds of potatoes from Desert Ridge the same day,” he said.

The huge amount of produce is finding its way to grateful recipients, and

Jim gave a heartfelt shout-out to Connie Beauvais, who he said “organized all the effort for this giveaway.”

“We distributed about 13,000 pounds of potatoes and 1,000 pounds of onions to western Clallam County, The Hoh, Quileute, Makah and Jamestown Tribes, Sequim and Forks Food Banks and Boys and Girls Club on May 21,” Jim continued. “We gave more away at the fairgrounds on Saturday, and we have 2,400 pounds of spuds and a couple hundred pounds of onions for the Elwha Tribe.”

By the numbers, Jim said the first day started at 9 a.m. and ended at noon, when the coffers were empty.

He corresponded with Colleen at Target AG, saying, “We easily
had a thousand cars come through our distribution lines [and] had four lines going at the same time. Each family got 20 pounds of potatoes and four pounds of onions.”

He continued, “We are exhausted – sent 10,000 pounds of potatoes and 500 pounds of onions to the west end. This covered Forks, Clallam Bay, Neah Bay, LaPush and the Hoh Tribe.”

A regional news story on the event was published at https://www.peninsuladailynews.com/news/potatoes-onions-distributed-free/ on May 25, with author Leah Leach noting, “ Seventy volunteers ranging from Boy Scouts to motorcycle club members handed out 29,180 pounds of potatoes and 4,800 pounds of onions at the Clallam County Fairgrounds in Port Angeles on Saturday.”

Leach said the volunteers described many of those receiving the food as “people you don’t ordinarily see at food banks — people who have lost jobs or been furloughed.”

Additional events are planned for coming weeks, organizers said, and Jim Buck added, “We are very sad that our Washington farmers are going through this awful situation. We hope they can take some solace in knowing the food they raised is going to people on the Olympic Peninsula who are also experiencing hard times. We didn’t waste an ounce.” 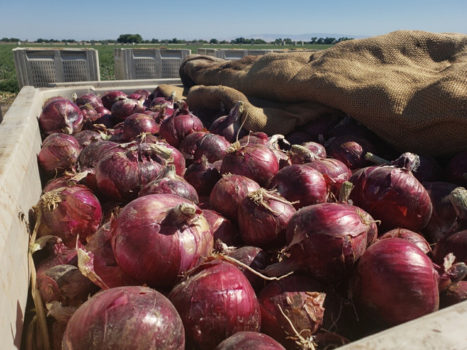