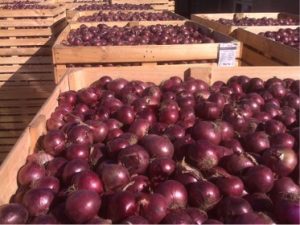 As a member of the National Onion Association and an exporter of yellow and red onions, NZ Onion Co Ltd keeps an eye not only on the U.S. markets but also on markets worldwide, Blake said.

Blake’s began his career in onions in 1985 as the export manager for Pukekohe-based M. McDougal Ltd, which ships kabocha squash to Japan and onions to “various markets around the world,” he said.

In 1988 he joined RPD Produce, where he was responsible for the sales of asparagus to Japan. He also oversaw logistical supply and movements of six to eight seasonal charter vessels that “carried in excess of 50,000 metric tons of NZ onions to the U.K. and European markets annually.”

It was in 2005 that Blake and his associates established NZ Onion Co. in partnership with two large Pukekohe growing families, and today the operation directly handles 15,000 metric tons of red and brown (yellow) onions to the markets in Europe and Asia,” he said.

Mike told us on April 4 that while the onion market has been volatile, NZ Onion has not felt the brunt of it.

He said, “The onion market for the NZ producers didn’t look that positive in early 2017 with very low prices in the European and U.S. markets, and we were not looking forward to the 2017 season.” But he continued, “Following my visit to Fruit Logistica in Berlin in early February, we were very fortunate to negotiate some good contract prices above the costs of production in the key markets for our onions in France and Germany with some of the main supermarkets and prepackers, and we felt a little more at ease.”

The important U.K. market, he said, “was not looking that positive for us after the Britex [Brexit] announcement, especially with the 30 percent devaluation of the pound against the NZ dollar, and it was always going to be a challenge to lift the [cost and freight] prices while the Northern Hemisphere market was on the rocks.” 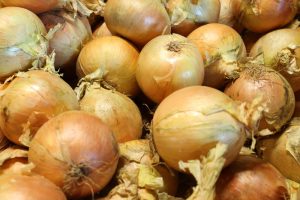 Mike continued, “In the end this was the reality as our main prepacker customers were instructed to keep on old European sourced products as supermarkets opted out of much of the Southern hemisphere supply purely on price.” He said that the United Kingdom was “once a key market taking over 40,000 metric tons of NZ larger sized onions, [and] the reality that we were only going to supply a small fraction of that amount has many of our key producers reassessing where they will place themselves in the world market as we are high cost producers and our miche off season supply position in the world onion market continues to be errored yearly by better storage varieties and long term storage techniques.”

This year’s harvest, he said, started well in February in the main production area of Pukekohe, and “the key growers took the opportunity to get as much of the crop off the ground as they could in good order.”

In March the weather patterns “turned around,” and “some of the later crops in Pukekohe have taken some wet weather.” Also, in some of the later production areas of New Zealand, Mike said there “is still quite a volume yet to be harvested.”

That means, he said, that the “quality of this late production now appears to have a question mark hanging over it as the wet weather continues, and there now becomes a question as to its overall suitability to meet market and customer expectations.”

Moreover, “with the Northwest exporters in the USA supplying good quality through early 2017 and putting pressure on prices in the Asia markets of Hong Kong, Taiwan and Japan, we have had to just sit back and wait for the market to come to us looking for better quality.”

Mike said, “That now appears to be happening and what we lost in sales in the U.K. now appears to be able to be marketed into the later markets of Asia as the quality in the Northern Hemisphere product quickly declines as spring kicks into gear.” 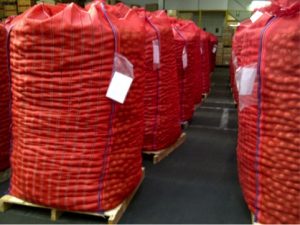 One major factor Mike sees as coming into play is “the quality of the Japanese early producers of over wintered onions for supply to the Japanese supermarkets in the May/June/July time slot. They appear to have continual weather related issues and some are now questioning the viability of production with the volatile weather conditions and disease pressures, especially mildew they now are facing on a yearly basis as they have other crops that they can grow that don’t carry the same risks as onion production.”

Mike said NZ Onion Co. is now “winding down our European volumes as we complete our contractual arrangements and now turn our attention to these markets of Asia that appear to be pulling more volume each week. While we still have a large portion of our crop on the water, the first arrivals in Europe have been very good and we don’t expect any issues but there is a long way to go. For the moment we have our fingers crossed that we can hold it all together and get through this season without too any unforeseen events or disasters.” 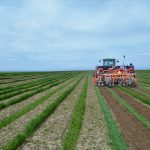 Market and Crop Update for April 6