With extremely dangerous weather systems hitting Georgia on Wednesday, April 5, OnionBusiness.com was keeping a close eye on that part of the country.

We spoke with contacts in the Vidalia region as severe weather closed schools and businesses, including onion sheds. Tornado sirens were reported, and weather news outlets told of heavy rain.

A succession of systems was bearing down on Georgia and the Southeast, with a new round of storms forecast to move across the region Wednesday night. We will continue to provide as up-to-date information as possible.

While getting weather information, we also spoke with Dale DeBerry of AllVeg Sales, who reported from his office in Boerne, TX. Dale provided us with an update on the crop, telling us Georgia growers had been “hitting it pretty good” in an effort to get onions in before the storms hit.

“They’re all getting ready to start the season, but what’s been forecast is the worst storm in the history of Georgia,” Dale said. “The crop has been looking good, and guys have been harvesting and putting onions into storage. My guys have harvested about 30,000 bags, or one-eighth of their crop.”

OnionBusiness.com will keep you informed as conditions change.

NAFTA to be forum topic at Viva Fresh 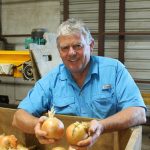