Onion News from Around the Country

Colorado: Fagerberg Farms in Eaton, CO, north of Denver started shipping its Front Range transplanted onions in early August, according to Ryan Fagerberg of the sales team. Ryan said weather has been good, and the farm and Fagerberg Produce is putting “the transplants through processing and out the door.” He said, “We got off to a bit of a slow start with the season because of our cool and wet May, but the dryness in the latter part of this growing season has helped. We’re moving all of our early onions straight out, and we’ll start putting onions in storage in mid-September. We’ll be done with our transplants in late September.” Fagerberg cleaned up its 2014 Colorado onions at the beginning of April, he said.

On Colorado’s Western Slope, Weslaco, TX-based Onion House is working with two growers in the Olathe area on direct-seed intermediate onions that will start shipping in late August or early September and run through September, according to Don Ed Holmes of Onion House. Storage will run into early January. Don Ed said the intermediates are “the prettiest of all the onions we sell.”

Utah: Don Ed Holmes of Onion House in Weslaco, TX, is also working with growers in Corinne, UT, on that area’s storage onions, which will run from mid- to late October into late January.

Treasure Valley IEO: Marc Bybee of Fiesta Farms in Nyssa, OR, reports that his company is about two weeks ahead of schedule this year with early onions. Marc said, “While we had hoped we would get an extra two weeks of growth on the storage varieties, we may be two weeks ahead on storage harvest too.” He said some growers in the region were reporting that size might be off, but for Fiesta Farms “sizing is good… and the quality is excellent.”

“We’re watching the market to see how it all shapes up while trying to keep customers in good supply early on,” he said. Fiesta is going into its second year partnering with Eagle Eye Produce, and Marc said the relationship is working out great for both operations. 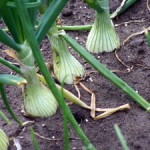