During the Onion Variety Day hosted Tuesday, Aug. 30, at the Oregon State University Malheur Experiment Station in Ontario, OR, Dr. Clint Shock, OSU professor and superintendent of the experiment station, told OnionBusiness.com that the seed trials went very well this season, as has been the case for the past several years.

Dr. Shock said advancements in seeds have been effective in keeping the yellow spot virus out, and he noted seed companies have also made great strides in breeding yellows and whites that aren’t susceptible to pink root. However, he said, red varieties in the trials are still susceptible, and the situation is something fumigation hasn’t been able to tackle. Because of this, the reds in the trials ended up on the smaller side, Dr. Shock said. 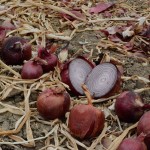 Professor Stuart Reitz of the Extension Faculty/Cropping Systems said overall in the Treasure Valley commercial growers have done a good job this year by paying close attention to their crops and controlling thrips and other issues that affect growth and quality. Professor Reitz said he’d seen thinner stands in the area, which have resulted in larger onions.

For more photos for the event and the Nunhems Seed Trials, CLICK HERE.

Photo of the Week, Niko Rogers 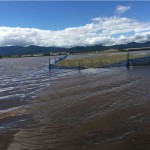