Since its start in 1977, Utah Onions in Syracuse, UT, has been known as a vertically integrated operation growing and shipping onions out of its home state. As of this week, the company is taking on a new name, one that describes it in much broader terms.

According to Onions 52 CEO Bob Meek, “We have simply outgrown our old name.” Bob said in a press release, “Now that we have farmers and partners in six states as well as Mexico, we needed a new name to fit with the growth of the company.” He went on to say that Onions 52 “says exactly what we want people to know, quality onions, 52 weeks a year.”

Bob said that year-round onion supplies are “who we are and what we do,” filling customer needs from onion production areas around the country.

Onions are supplied by Hartley Produce, which is owned by Shawn’s family in Prosser, WA. Oregon Trail Produce, owned by Sam and Mark Hartley in Nyssa, OR, also provides product. A 2017 alliance with the Johnson family and Carzalia Valley Produce in Columbus, NM, “fills an important window from May to August,” and Onions 52 partners with Southwest Onion Growers in McAllen, TX, with operations in Mexico, Texas and Colorado. The company built a Dallas facility in 2016 where onions are packed for in-market distribution.

As the company has grown in size and volume, it has also expanded in corporate structure. Travis Flint joined the team as CFO last year, and new to the sales team are Devin Taylor and Travis Hess. In addition, Thomas Pickett has come on board to work in traffic and production, Bob said.

Adding to the excitement of a new name is a new packing plant that Bob said will expand production in Utah. A new corporate office is being built as well, and he said in September the plan is to have the new plant operating in October. In the meantime, the older plant continues to run.

“There is never a week without onions from us,” he said. “With a full line of onion products from 2,000-pound totes to two-pound bags, you can count on us for year-round supplies. We grow and deliver high quality yellow, red, white, sweet and organic onions 52 weeks a year. We pride ourselves on quality, consistency and ease, and those things are not going to change.”

Bob said, “As we like to tell people who’ve asked us about the name Onions 52, ‘This is who we are. We have onions all year.’”

In addition to the new name, Onions 52 also brought on new personnel within the last year. Meek said Trevor Flint came on as CFO in 2016, and joining the sales team are Devin Taylor and Travis Hess. Thomas Pickett works in traffic and production, Meek added.

“We love what we do, and we’re very excited to share this great news,” Bob said. 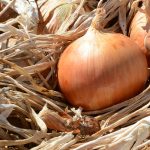 Market and Crop Update for September 28