While the new onion season continues to roll out in the Treasure Valley of Idaho-Eastern Oregon, one company is planning its inaugural PMA Fresh Summit exhibit.

Baker & Murakami Produce Co., a joint venture between longtime Ontario, OR-based onion shippers Baker Packing and Murakami Produce, hit the ground running on Aug. 22 with its first loads, and company principal Grant Kitamura said he and co-principal Jerry Baker will be manning Booth 4540 during the Oct. 19-21 show in New Orleans. Partner, Chris Woo will be assisting in the Potandon Produce booth. And co-principal, Steve Baker, will remain in Ontario to oversee operations at the new high-tech packing facility.

Grant told OnionBusiness on Sept. 19 that Baker & Murakami will occupy Booth 4540, which is adjacent to the Oregon Department of Ag’s booth and across the aisle from Idaho-Eastern Oregon Onion Committee/USA Onions’ Booth 4545.

“We have a 10×10 booth, and Jerry and I will be greeting visitors,” Grant said. “We’ll have meeting space to get with clients, and we’ll also be explaining our new operation. A video of our new line will be shown, and we’ll be describing the equipment.”

He said the Friday and Saturday expo days, Oct. 20 and 21, will “allow people to be back and work on Monday, which is important to us.”

And, Grant said, “This being our first year as exhibitors, we’re hoping to meet up with some of our old friends and new friends as well. We look forward to telling them about our new company and letting them know we’re shipping beautiful onions.”

The crop, he said, has come in late due to a number of weather factors, and he said, “We got started on Aug. 22, which is at least 10 days later than normal for us. The harvest is late, but the onion quality is beautiful. We plan to have product and pack options to show our visitors at the booth.”

VOC to roll out new logo at PMA 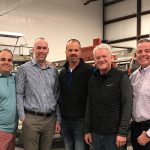