We love fun stories, and we especially love fun stories that were birthed by the mostly unfun year of 2020. Such is a recently produced and posted podcast found at  https://openfieldradio.com.

Open Field Radio, presented by Gowan Company, was launched in September 2020 and is “an Ag-centric bi-weekly podcast with the goal of entertainment at its heart,” the website reads. “The Open Field Radio team strives to create content that is both informative and fun to listen to.” Host Mark Flint, a two-decade veteran in broadcasting with a heart for all things ag, approaches his subject matter thoughtfully with well-crafted questions and a great sense of humor.

The combo works well in all settings. Mark’s done stories on a cricket farm in Ontario, Canada, a cacao farm in Miami, an oyster farm in New Jersey, robotic tractors, beneficial insects, the groundskeeper for the Cincinnati Reds and an urban gardener/teacher in New York City.

And, to our delight, the “Onion King” in Weslaco, TX.

The Feb. 18 featured podcast, which can be found on multiple platforms and at https://openfieldradio.com/playlists/f/the-onion-king, features our good friend Don Ed Holmes of The Onion House. The 47-minute presentation is classic Don Ed, lots of Texas tales and good humor and lots of good information about short-day and long-day onions. The interview took place the week before the February freeze.

Don Ed described his childhood in the Texas Panhandle town of Floydada (also known as the Pumpkin Capital of Texas) where his father started growing onions in the mid-1950s. Don Ed, who was born during that period, is literally a lifelong onion man who “came on in the first grade in 1961, picking up empty burlap bags” that had brought onions in out of the fields. “After a couple of years of that I graduated to turning the sacking wheel and then to grading.” When he was in the seventh grade, Don Ed started driving a forklift, and during high school he ran the packing line and grading. He and all his friends loaded onions, something their high school football coach approved of wholeheartedly as the workout from loading often kept them from “being knocked into the week after next” by big boys on the opposing team.

Don Ed explained that after graduating from Texas Tech he didn’t want to go into farming, but he stayed with produce and worked for De Bruyn Produce in several capacities for 20 years. In the late 1990s he entered into a partnership with a group of Colorado growers and incorporated The Onion House in 1999. Since 2005 Don Ed and his wife, Janie, have been sole owners of the operation, one of the largest shippers in Texas with onions 11 months of the year.

“I came to the Rio Grande Valley in 1977,” Don Ed said, calling it the “Urban Cowboy” time, and he said his time in that area, where he and Janie raised their three kids, has been “very rewarding and has worked out really well.”

Don Ed shared his take on the evolution of the onion industry over the past several decades, noting, “It changes every year.”

Many deals were struck in person and solidified on a handshake. The telephone, hardwired and often single-lined, was the primary means of more frequent communication. And there were a lot more people involved in the transactions. There aren’t as many players now, he said.

There were also more personal relationships. “The fax machine changed that,” he said, adding that the fax was soon replaced by email, which has given way to texts in many cases. In some instances now, deals are made without any conversations.

But one constant is the relationships a shipper maintains with his growers, and Don Ed said his comes from knowing the farmers for decades. Part of his kinship with the growers is more or less genetic – he grew up on a farm and knows the work and planning that go into a crop. “If a farmer doesn’t put the seed into the ground, I don’t have a job,” he said.

And this entire informative and fun podcast, with its basis in authenticity, was the result of what Don Ed said is the “six degrees of separation” in the industry. Turns out one of Don Ed’s best friends from high school in Floydada went on to a career in broadcasting and worked at a station in Yuma, AZ, and hired “a guy named Mark Flint” who is now a podcaster, Don Ed said.

Mark, who said he was lucky as a broadcaster to have “found my way into ag” with Gowan Company’s communications, commented that Open Fields was conceived by a well-versed team.

“The idea was to show one degree of separation between ag and life,” he told us. Many people, he said, simply don’t see ag “running through the middle” of their lives, and instead of producing “something so deep with eight listeners, we’d give a 35,000-foot view” so people can see the big picture. “Hopefully industry people dig it and at the same time your mom loves it, too.”

At Open Field, “Everybody in it is at the top of their game. Everyone is excellent at what they do,” he said. At this time, Open Field has active listeners in 45 states and 18 countries, “all since September,” Mark said.

“The Open Field Radio team consists of five members,” he added.  “I am the host and producer. There is also, Mikey Thomas, Kyle McLaughlin, Zoi Sanchez and Tracie Berger.  The five of us also make up the entire communications team for Gowan Company.”

“Exploring the culture in agriculture, the OFR podcast centers around interesting people who live and breathe agriculture and ventures beyond to people that have one degree of separation from the Ag industry,” the website says. “We’re fascinated by all the ways Agriculture moves and inspires us.”

The show has been met with enthusiasm from all fronts. “Open Field Radio was listed by Midland USA as one of 10 podcasts to listen to in 2021,” Mark told us. “ Our guests have been seen in Time Magazine, Business Insider, The Today Show, Next Iron Chef, Travel Channel, Food Network, MSNBC, PBS, NPR, New York Times, The Atlantic, USA Today, Esquire, Arizona Highways and countless industry publications and podcasts.”

Read more about upcoming podcasts from Open Field at www.openfield.com and also Gowan Company at https://gowanco.com.

Focus on Logistics: Transportation not expected to get easier over next few months 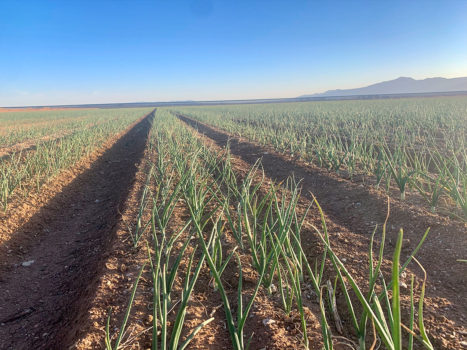