A cool spring resulted in somewhat later spring planting, but the 2019 Walla Walla season nonetheless is kicking off right on schedule with first loads going out June 14 or 15, according to Michael J. Locati of Pacific Agra Farms. Michael also told us a new logo is being introduced on all the Walla Walla Sweet packaging.

“It was cooler during parts of the growing season, with more sporadic rainfall during the spring months,” Michael said on June 11. He added, “A couple of hot weekends got us caught up, and of course coupled with wind actually had us starting about the same time as last year – which is a little early.”

During the past few months, key focuses, he said, “were water and disease management over what we would say is normally water and insect management during the spring months.” The onions will be mostly mediums in the early loads, “but trending jumbo quickly.” And he said it’s “a little early to tell” how late the season will run.

The Walla Walla Sweets are planted with retail in mind, with a large part of the crop direct seeded by hand each fall. In the spring the growers have more seed planting, along with transplants, and the hand harvesting traditionally starts mid-June. Michael said Pacific Agra’s combined acreage “seems to be holding steady, and as the market changes, we will see what happens.”

This season the LLC has limited volume of its new rosé sweet, and Michael said, “It’s definitely a goal to increase our Walla Walla Sweet Onion RoséÔ acres in the coming years. It all depends on demand – we tailor our offerings to our customers’ needs.”

About the new logo, he said, “It was time. We are a good mix of the old and the new – the tradition and also the future. It was time that for our brand to embody this current group of growers. We also learned to recognize the need for consistency across everything that we do that will represent us. This refresh of our brand comes from who we are. We wanted to market ourselves in a way that speaks to our consumers and appeals to how they receive information about and purchase their produce.”

Michael continued, “We’ve also started to include information our packaging regarding the steps our farms take to promote food safety and the welfare of our employees. This is something we know matters to consumers, and something we take very seriously. Kudos to my partners who have been leaders in this movement!”

The partners in PAF, which was formed in 2017, are all veteran onion growers. In addition to Locati, there are Harry and Luke Hamada, Art Villa and Vidal Pedroza. Additionally, all onions grown by the PAF are packed by Walla Walla River Packing, and marketing is handled by Keystone Fruit Marketing.

The mix of old and new, as Michael called it, refers to the fact he is fourth generation of a family that came to the region in 1905. He is now a Walla Walla Sweet grower and the current chair of the Walla Walla Sweet Onion Marketing Committee, which is a position his uncle, Michael F. Locati, held for a number of years.

Father and son Harry and Luke Hamada are the descendants of Jikichi Hamada, a 1906 immigrant from Japan who started farming in the Seattle area and moved to the Walla Walla Valley following World War II, during which he and his wife and seven children lived in an internment camp. The family began raising onion seed in the Walla Walla Valley, and Jikichi’s grandsons Randy, Barry, Alan, Harry and Brian all became Walla Walla Sweet growers. Villa is a long-established grower in the region and sits on the WWSOMC, and Pedroza comes from a farming family in Mexico.

Walla Walla River Packing is also seeing improvements to the storages and to the packing facility itself to “combat the ever-changing labor issue,” Michael said, and when asked if there are plans for additional changes in the next couple of years, he hinted, “Time will tell.” 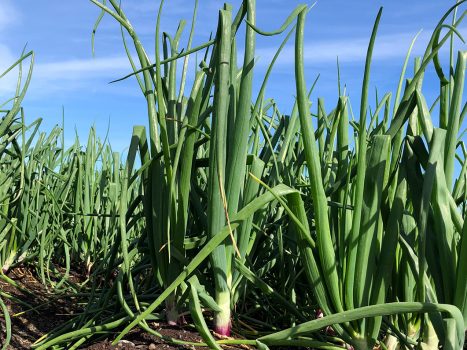