Peri and Sons Farms in Yerington, NV, and Salinas, CA-based Nunes Co. have joined forces to build a new cooling and distribution facility in Yerington, according to a press release from Nunes this week.
Construction of the new Walker River Cooling facility broke ground in early September and will be built in three phases as a collaborative effort by “two of the nation’s largest family run organic fresh produce operations.”

The project has already brought more than 800 jobs to Lyon County in Nevada, with “additional job growth projected upon completion of the new distribution facility.”

Peri and Sons, “one of the country’s largest onion growing operations,” and Nunes, “one of the nation’s largest grower/shippers of organic fresh produce marketed under the Foxy organic brand name,” are looking at a May 2017 opening of the facility that will “service retailers, wholesalers and other buying organizations throughout North America,” the release said.

The release went on to say that Peri and Sons and the Nunes Co. “have been working together since 2008, growing and marketing organic fresh vegetables in Lyon County for consumers across North America.”

Peri and Sons Executive Vice President Pam Peri said, “It’s paramount that we keep up with the demand of the growing organic marketplace and servicing our customers. This new facility will be an integral part of growing our business and plans for the future…. We will have the necessary land, water and labor resources needed in the coming years to continually supply our customers with the highest quality products available. The combined strength of our two companies coming together will mean greater efficiencies for us, as well as our customers.” 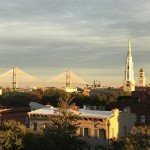