Each year Potandon Produce brings something new to its PMA Fresh Summit booth design, and 2016 mixes vintage with cutting-edge in its “a night at the museum” theme.

The company will actually be a part of two exhibits, its own Booth 801 and also with the Green Giant Fresh group in Booth 1443.

According to Ralph Schwartz, vice president of sales, marketing and innovation at the Idaho Falls, ID-based operation, Booth 801’s theme is “You can find what you’re looking for at Potandon Produce.” He said, “The booth décor will be similar to ‘a night at the museum,’ where we intend to show how Potandon fits into the timeline of the overall fresh potato and onion industry. We’ll be using plenty of props and displays to call attention to our products in a fun way. Since we are located right across from one of the show’s entrances, we plan on having a huge display right in the front of the booth so entrants really get the big picture of what a full-sized well merchandised potato and onion display can look like.”

In addition, new products will be on display. “We are going to show a new tri-color onion bag in Green Giant label,” Ralph said. “We are also debuting a new mini potato pouch package.” 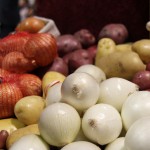 By greeting new and existing customers in both booths, Potandon staffers can maximize their time at the Orlando show.

“ We’ll have staff in both booths as we have done for many years,” Schwartz explained. “Our product placement in both areas allows for multiple customer contacts and the opportunity to attract potential new customers that might be brand focused.”

He said the sales team will also have space “to sit down and speak with customers in our booth.” 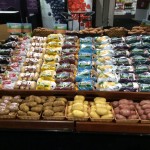 Ralph added, “We’ll also have two members of our Sunrain team at the show, Aron Derbidge and Jim Corneille, and we expect some Simplot folks to also join us.” 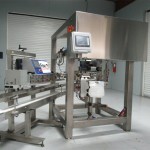 Fox Solutions to introduce the Pouch Bagger at PMA