As the onion deal moves from one production area to another, PROSOURCE Inc. COO Corey Griswold and the staff and crew have been in what Corey described as a “whirlwind” as they harvest in Texas and transition in other regions. But OnionBusiness caught up with Corey on May 1, and he told us the Northwest is winding up its 2018-19 season.

“PROSOURCE Inc. is currently on the tail end of our Northwest onion production at Golden West in Parma, ID,” he said. “While the market has cooled off considerably from the highs that we experienced in March, we are fortunate to have a loyal direct customer base that has stuck with us and allowed us to near the end with consistent business.” And, he said, “We do still have limited quantities of both yellow and red onions and we anticipate finishing for the season late next week.”

The onions remaining to pack and ship out of Idaho are all cold storage Crocket variety yellows, and Corey said, “They are excellent quality!” This has been the first full production season out of the new Golden West facility, and “barring some low level market periods it was a huge success,” he noted.

The operation’s former facility in Nyssa, OR, was leveled by the Snowmageddon of 2017. With advanced technology, increased capacity and the efficiencies of automation part of the first season’s start-up, the new facility added even more during the year.

Corey said there’s been the “addition of the fully automated Volm small bag line, automated baler, and one more SYMACH palletizer on that line increased our consumer packing capacity by about 200 percent.”

And he went on to say, “Antonio Carone, our Director of Food Safety and Production Efficiency, worked tirelessly early this season to maximize the efficiency in the packing shed and the quality coming out of it. It’s truly a testament to what a great vision, hard work, and dedication can build.” The result is that “Production out of Golden West this season allowed PROSOURCE 79 percent more packed onion packages to take to market for our customer base than ever before.” What’s more, he said, “One hundred percent of our 2019-2020 onion crop is planted in the Treasure Valley, and we are looking forward to next season.”

Texas has also expanded the reach of PROSOURCE, Corey said.

“Last summer was the first year PROSOURCE Inc., and the Carnes family from Winter Garden Produce, LLC., in Uvalde teamed up, and despite some difficult market conditions, it was an overall success for all of us. The Carnes family does a great job, and we are proud to be starting a new packing/shipping season with them.”

“I was there last week, and the onions look good, it will be mostly a jumbo and medium crop there,” he said. “And we will have decent mixer volumes of bigger onions. Overall, acreage in Uvalde is similar to last season, with the exception that we will have more reds in the mix to fulfill our contract and open market needs.  For the next week look for production to be somewhat limited as J. and the Winter Garden crew get running and up to full production capacity.”

Weather has been, as always, the question mark, and Corey said, “There is sporadic rain and thunderstorms in the forecast there, and that may affect harvest and packing schedules in the coming week.  Overall, we are looking forward to what should be a good level trading market on all colors this season in Uvalde.  Winter Garden packs a full line of bagged, boxed, and consumer packed onions, we have 50-, 40-, 25-, and 10-lb. cartons in inventory, as well as capacity to run stickered onions to meet any need.”

As the new crop season progresses, harvest will begin at Rio Valley Onion (RVO) in Rincon, NM, late the last week of May, Corey said.

“We will begin packing on approximately June 5. Since last summer there have been some significant improvements in the Rio Valley packing facility that will increase production in some key areas.  Rosie and Rena have added two more clippers, an automated baler and palletizer to the consumer line, the same set-up we run at Golden West. Improvements have also been made to the existing carton line,” he explained.

“Onion acreage for us in NM is very similar to last season, and we have added a couple of contract growers to the existing mix.  Overall onion volume to pack at RVO will be increased on both yellow and red onions, and whites will be on par with the past couple of years.  This packing season we plan on increasing production 30 percent at RVO, so we will have more volume to bring to the market and our existing customer base,” Corey said. “My initial feeling is that much the same as Texas we should have a good productive trading level market for the majority if not all of the New Mexico packing season, and we are ready to get rolling.”

And there’s the Mexico component as well. “PROSOURCE and RVO will begin crossing whites from Mexico in El Paso late next week and, we are looking forward to having good supplies of solid white onions for the remainder of the summer,” Corey said. He said all questions about the company’s program, availability, pricing, freight or shipping varieties can be answered by the sales team at (208) 928-6929 or by emailing sales@prosourceproduce.com. And the operations always welcome visitors, he added.

View the ProSource photo gallery below. Click to enlarge and to get captions of the areas featured. Featured image: Uvalde onion field. 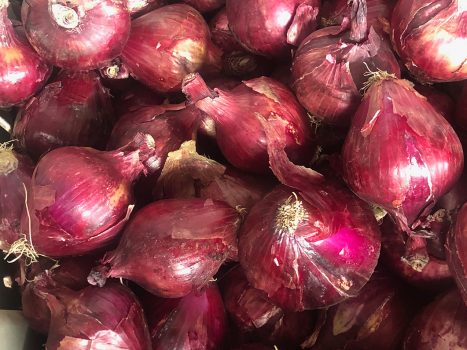