With more overall attendees and 169 exhibits, this year’s Viva Fresh Expo that ran April 25-27 at the JW Marriott in San Antonio was a success by all standards.

According to Dante Galeazzi, CEO/President of the expo’s host organization, Texas International Produce Association, the 169 exhibitors is one more than last year – and that’s by design. “Our goal is to keep the show floor at a manageable size that fits well and is ‘do-able’ for attendees within the expo’s time-frame of four and a half hours,” Dante said. And the showcasing of Texas produce means onions are a big component of the show.

Dante said attendance was up significantly for year five, noting, “We’re still pooling the final numbers, but early indicators are that show attendance this year was over 2300. That’s a new record for Viva Fresh! Last year, we had less than 2100. Every year, we continue to see good growth, and interest, in the show.”

And there’s been growth on the international front, with attendees coming from a number of countries and entities.

“We are seeing more international participants,” he said. “A majority of these international show-comers are from Mexico, but what we’re seeing is that now we’re getting more exposure across the various states in Mexico, as well as more representatives from different entities and industry. This year we had the Secretary of Agriculture from the state of Guanajuato, which makes us feel proud that Viva Fresh is not only a great event for networking and making new relationships, but also that the show is also being considered as an international platform for fresh fruits and vegetables.”

Like other expos and conventions that showcase fresh produce, Viva Fresh starts planning its next event soon after the current show closes. “We’ll take a small breather, but next month we’ll get back to work and start planning the 2020 Viva Fresh,” Dante said. “We work hard to put together a show that is a true regional expo, highlighting the incredible produce offerings of our region. Health and nutrition, marketing, industry issues – all these things get worked into our planning. And throughout it we also focus on keeping the show smaller and more intimate so that attendees have lots of time to network and create meaningful business connections.”

He added, “Next year’s Viva Fresh will again be hosted at the JW Marriott Hill Country Resort & Spa in San Antonio. Dates are April 30 to May 2, so be sure to mark your calendars!”

And judging by the terrific photos provided to OnionBusiness by Janie and Don Ed Holmes of The Onion House in Weslaco, TX, Viva Fresh was enjoyed by all who attended. Janie sent photos of the outdoor reception, showing a great crowd and fantastic fare. You’ll see some of your onion industry buds in the shots as you scroll through. Don Ed provided us with photos of The Onion House’s booth at Viva Fresh, where he and Janie greeted visitors, as well as the neighboring ValVerde booth.  And seated with Don Ed at the reception is daughter Montana.

Our thanks to Dante Galeazzi and Don Ed and Janie Holmes for their help!

View photos Don Ed and Janie sent of the cool reception and trade show including our featured image. 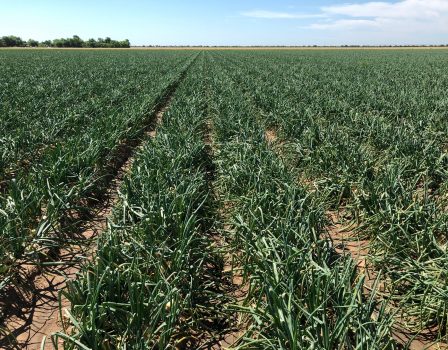