More onion acreage is being planted in the Texas Rio Grande Valley for 2016 spring harvest, according to Don Ed Holmes of the Onion House in Weslaco, TX.

Don Ed told OnionBusiness.com in early October that his operation is seeing an increase in both and reds and whites for the coming season. He said planting started in late September and was about 15 percent complete.

“Between Sept. 28 and Nov. 28 is our planting window, when the weather is generally good,” he said. “This year we are planting a few more reds and whites.”

Overall acreage for Onion House increased by 15 percent, he added.

“Most of our November plantings are Sweet Sunrise,” he continued. That variety comes off around April 5, and the earlier varieties come off starting in March.

Figures by the National Onion Association show Texas has approximately 9,500 acres of onions, with annual production of an estimated 234 million pounds. The Rio Grande Valley is known for its sweet onions, and Aggie Horticulture, a publication from Texas A&M on line, says, “Onion sales bring the state between $70 and $100 million per year and the onion industry has an overall impact of about $350 million per year on the Texas economy.”

Sweet Bermuda onions were the first to be grown in Texas and came to the state in 1898 – and the rest, as they say, is history. 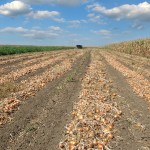