Texas 1015s in the pipeline

While volume will hit in a couple of weeks, early onions from the Texas 1015 crop are now in the pipeline.

According to Dante L Galeazzi, CEO/president of the Texas International Produce Association, the weather is “finally cooperating and starting to warm up, which means onions should be around the corner.”

Dante told us on Feb. 27, “We typically have a few companies that hit an earlier window, and there are actually several companies shipping 1015’s as we speak. However, the bulk of the crop for the Texas 1015s should begin in mid-March, right around St. Patrick’s Day.”

He added, “We may see a slightly later start this year due to some cold days in January and early February, but it’s still on track to be a March start for the big part of the sweet onion crop.”

As one of the country’s harbingers of warmer weather, 1015s are a natural fit for backyard barbecuing.

“Marketing opportunities for Texas 1015 sweet onions fit perfectly with spring promotions, especially in the Southern states,” Dante said. “As it starts to get warmer, barbecues start coming out of storage, families start spending more time outside and onions are an essential ingredient in many spring and summer recipes.”

And, he said, “The Texas 1015 sweet onion is an especially great fit for fresh salads and sandwiches because it’s so much less pungent than other varieties, which makes it great for uncooked dishes.” 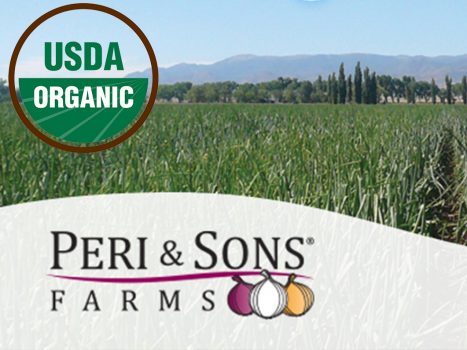