The Boise facility for Tolsma Storage Technology is rolling out some interesting new technology ahead of the 2018-19 Northwestern onion season and plans to demo the new bin filling equipment will be announced soon.

According to Joseph Eiguren, Director of Business Development and Sales, the VHM Twinfilr can significantly reduce labor in the bin-filling process. The machine has two loading hoppers, and it weights each hopper for accurate bin weight.

Joe provided a web link http://vhm-machinery.nl/en/boxfilr-series-usa/ And for a quick view, take a look at this YouTube video:

“The fillers have been in use in Europe for several years,” he said. “Now there’s one in the United States that specifically fits the bins in Idaho-Eastern Oregon.”

In addition to the new bin filler, this year saw the rollout of the Tolsma Mobile Curing/Drying Wall. The prototype machine was initially developed for white and red onions, and it, too, can be moved around not only the shipper’s facility but also from one facility or area to another, Joe said.

“The concept is to allow farmers/packers to place this unit(s) in various locations to dry/cure green top onions early in the season,” he added. The unit includes a Tolsma 9.55 EC Fan, as shown at https://www.tolsmagrisnich.com/wp-content/uploads/2016/06/TOLSMA-5138B.pdf

“Our fans use electronically commutated, or EC Technology,” Joe said. “They do not require variable frequency drives (VFDs) and they use significantly less energy to run.”

And the third new tech addition at Tolsma in Boise is the Mobile Cooler, which Joe said has come into demand during the recent winter. “We will be manufacturing quite a few more next year,” he added. “We might have one on site this year, but it’s more likely the existing units will be in use.”

Working with grower/shippers, the Boise Tolsma facility has provided multiple upgrades and manufactured and installed new equipment in the Treasure Valley. The Snowmageddon of 2016-17 winter necessitated completely new construction in some cases, and Joe said, “One of our crowning achievements was getting Golden West a line as quickly as we could. From March 2017 to Nov. 1, we went from dirt to a fully functional fresh pack line.

Golden West’s Nyssa, OR, facility was leveled by the heavy snow and ice from the 2017 storm series, and a new packing and storage facility was built on the Idaho side of the Snake River near Parma, ID.

Joe also cited work with several other growers/shippers in the area. One in particular, J.C. Watson Packing Co. in Parma, Tolsma built a storage specifically for white and red onions. “It’s an envelope system with special bins that have solid sides and bottoms,” he said. Brad Watson, Vice President Operations of J.C. Watson, produced a great video demonstrating our new storage. The video is also our featured video included on the OnionBusiness.com sidebar.

Tolsma, which opened its Boise branch in 2015, has a long tech background that started in Holland three-quarters of a century ago with wristwatches. The company expanded into Netherlands potatoes, and in the early 1950s, it was developing potato storage systems. In the late 1960s, the basis of the current company was established with the manufacturing of fans and triangular air ducts for potato storage. That technology expanded to include removable partitions, temperature measurement, and climate control.

International expansion kicked off in the 1980s, first in Europe with sales of storage systems for spuds, onions, carrots and other vegetables. Acquisitions brought more growth, and in the early 2000s, Tolsma expanded into additional ventilation and control tech. Today the company has sales divisions worldwide and provides multiple solutions under the name of Tolsma-Grisnich. 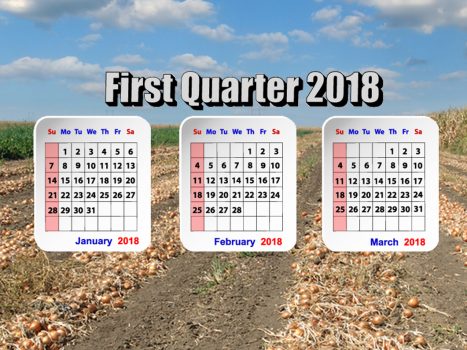