It’s been a much different first quarter for 2018 than that of 2017 on multiple fronts, with good crops and steady demand noted by most coast-to-coast shippers we contact each week.

Still, the consensus has been “prices could be better,” and while optimism is the name of the onion game, transportation, labor, and trade issues have definitely impacted the industry.

Here’s a quick look back at YTD, with some reflection on how it was a year ago…

Early January 2018 market saw good demand for Northwest onions. Oregon reported tighter supplies due to overall demand; prices were steady and not on the rise. Idaho-Eastern Oregon had a lot of orders, but transportation issues were slowing movement in some cases. East Coast shippers reported a leveling off of the market, and the Great Lakes region said demand was fair, with transportation a struggle.

The crop reports in early January included news out of Georgia that a half-foot of snow had fallen but that the crops were fine.

Mid-January market reports told of tight transportation and steady demand that was lower than the holiday pull. Wisconsin was one exception, with a shipper noting a very busy period due to covering loads that couldn’t be delivered from the West. Colorado was in good shape for the season, with one shipper 75 percent through his storage crop. Idaho-Eastern Oregon was experiencing slower demand and continued transportation shortages. Nevada reported both good movement and good pricing; Washington said the market had slowed. Mexico was gearing up.

Mid-January crops were seeing good weather in S. California; parts of the San Joaquin Valley were waiting for the ground to dry out. New Mexico was progressing very well, and the Texas Rio Grande Valley was expected to “wake up” within the month.

Late January markets saw normal demand for Washington, and of course, transportation was the major factor in movement. Idaho-Eastern Oregon reported consistent demand and a steady market. E-Logs, truck shortages, and freight rates were the topic of conversation, although some shippers noted an easing in transportation. The cost of trucks was still high, but availability was better, and that made movement better as well. Mexico continued to pick up, and Peru came in.

Crop news for the latter part of January was that Texas was awaiting warm weather; Georgia could be slightly delayed.

Early February markets reports indicated a slight dip in demand for Oregon. Washington/Oregon reported steady sales; Idaho-Eastern Oregon noted a slowing after a big Super Bowl weekend. Trucks were at better rates in IEO. Mexico had seen some cooler weather, which slowed the northern Tampico start a bit; one shipper said the market was slow for produce as a whole. The Great Lakes also reported slower demand and a tightening up on some colors.

Crop news the first part of February was that the South Texas crop was progressing more slowly than normal as cooler weather prevailed, but the crop was described as looking very good. Mild weather in the Treasure Valley of Idaho-Eastern Oregon allowed some growers to prepare for planting; Oregon was reporting a very nice overwintered crop after a mild winter. Planting in the Imperial Valley was going on, and New Mexico continued to weigh in with very positive crop reports.

Mid-February market news out of Idaho-Eastern Oregon was that demand was moderate and the market was steady. Transportation was better, and inventory was manageable and promotable. Mexico had yet to come in with big volume due to cooler weather, but movement was expected to pick up. Wisconsin was seeing steady movement and pricing on medium yellows; New York reported the best movement in reds and whites, with steady demand and what was termed as a “flat” market. Truck rates were a bit lower.

Our mid-February crop updates indicated Arizona was on schedule for late April, and Idaho-Eastern Oregon reported some early planting. The Rio Grande Valley was still seeing some cool weather, but the forecast was for warming temps; first loads were expected to ship in early April.

Late February market reports were of increasing demand for Washington and anticipation for the Easter pull. Pricing was termed “disappointing.” Idaho-Eastern Oregon cited moderate demand that was picking up, and freight quotes were down. Demand was picking up for Mexico, and buyers were switching to new crop. Transportation was said to be better.

In the crop news of late February, the Rio Grande Valley crop was doing well although still a bit later than normal. Imperial Valley was progressing very well; Bakersfield had good stands that were expected to be ready for harvest in June. Washington was expecting to get in the fields around March 5; Idaho-Eastern Oregon was looking at March to start planting in earnest. Georgia said the crop was down on stands due to the freeze, but onions were looking good and warm temps were moving things along.

The Market News report of early March was that business was steady in Oregon, but prices had not increased. Demand for Idaho-Eastern Oregon was off initially but then picked up, with Mexico affecting some markets. Trucks were easier to book; railcars not readily available. Nevada sources called the year to date a “roller coaster,” with a strong market leading into 2018 and a slowing in demand since then. Mexico was moving all sizes, colors and packs, and it was expected Mexico would overlap with the Texas 1015s. Some Wisconsin sheds were cleaning up while others planned to go into May; an increase in pricing was anticipated. New York cited good demand.

Crop news out of the Imperial Valley was for an early harvest after the mild winter. The San Joaquin Valley’s overwintered and intermediate onions were planted for June and July harvest, and long days were going in for an August harvest. New Mexico saw 100 percent emergence on spring seeded, and overwintered onions were waking up for an on-time crop to come off the third or fourth week of May. Texas Rio Grande valley was still a few weeks away from its real start, and the consensus was the crop was the healthiest in many years. Winter Garden was expected to be a week or two later than last year. Walla Walla reported in that the season was setting up to be good, with transplants going in and harvest expected early to mid-June. Idaho-Eastern Oregon guys got into the fields.

Mid-March market news out of Washington was that most shippers were out of whites and were shipping red hybrids and yellows. Some shippers were cleaning up while others expected to go into April and possibly May. Idaho-Eastern Oregon reported consistent shipments and an uptick in demand. Quality remained very good, and both trucks and railcars were in better supply. Texas had some early 1015s shipping in low volume; demand was called “incredibly strong” for Mexican yellows in all sizes. Peru was winding down.

Mid-March crop news out of the Imperial Valley was that the crop was looking “absolutely fantastic.” Idaho-Eastern Oregon was planting; Northern Colorado growers were also planting. Texas Rio Grande Valley was expecting to ship additional onions in late March; Vidalia remained “slightly behind.”

And to wrap up the first quarter report with late March market news, demand was said to be good for the Northwest and Mexico, with a switch to California planned for mid-April. Movement was also said to be good for Idaho-Eastern Oregon, with that area slowing. One Mexico deal was “rolling wide open” on the back side, and a few more Rio Grande Valley 1015s were in the pipeline as the weather warmed up. New York said demand was good and movement “decent.” Wisconsin was looking to run until early May; and Nevada wrapped up the third week of March.

Crop news for late March was that Texas Winter Garden, as the Rio Grande Valley, had a beautiful crop ahead; New Mexico continued to enjoy great weather; Colorado’s Western Slope was starting to plant, as was Utah; Idaho-Eastern Oregon was hitting the good weather windows for planting; and Vidalia was awaiting word on the start date. California onions continued to do well, with the Imperial Valley still a bit early and the San Joaquin Valley planted and healthy. Much of the Treasure Valley was in.

Looking back at 2017, when the Northwest was reeling from Snowmageddon and trucks were needed to respond to the hurricane triplets of Havey, Irma, and Maria, it’s interesting to note the market changes and the market similarities.

Grant Kitamura with Baker & Murakami Produce in Ontario, OR, commented from the shipper’s point of view that “2018 is better than 2017 for the first three months. However, it is not as good as anticipated. Growers and shippers need to remember to orderly market their crop throughout the season, regardless of production levels.”

In Weslaco, TX, Don Ed Holmes with The Onion House said, “A year ago we didn’t have any more onions, but last year the market was $8 going to $9 going to $10. We’re about two weeks behind that now. The truck deal hurt the Northwest. They didn’t have trucks for the Christmas and post-Christmas rush. So there was a short crop made long by no transportation.”

And Brenden Kent with Sunset Produce Company in Prosser, WA, said, “Overall, the start of 2018 has been better than last year. That said, it hasn’t been what was expected. There are still things the industry needs to work on, some of them being issues we face with trade.”

Another insightful take on this year was provided by Jason Vee with Vee’s Marketing in Lake Nebagamon, WI. He said, “My impression of first quarter 2018 is that it was sluggish and uninspiring. I am down significantly from 2017. Freight was the most difficult it’s been since I started here in 2006, and I felt like I was only selling to my truck capacity – that was holding me back.”

He added, “But that’s all feeling and emotion. The real information is in the quarterly reports. After doing a quarterly review, I discovered (and remembered) a few things. Markets are up significantly over 2017. When I compared markets of 25# jumbo reds, 50# jumbo yellows and 50# jumbo whites from this year to last, I averaged a 50 percent market increase over last year.”

Moreover, Jason said, “When I compared my case count in U.S. customers that have very little deviation, I found that volume was within 5 percent of what we did last year. So, if the market is up and volume is the same, how can I be down?”

The answer: “Two things: Freight and Canadian crossings. I found myself taking a bath frequently on freight contracts and delivered price commitments all through January. It’s not ideal. Sometimes integrity is expensive. I do a fair amount of Canadian business, and I’m missing that this quarter.”

And the reason, he said, “is not political.” Jason said, “It’s a matter of onion supply in Western Canada. Last year the onion supply was down, so crossings were robust. This year the supply is high, and crossings are down.” 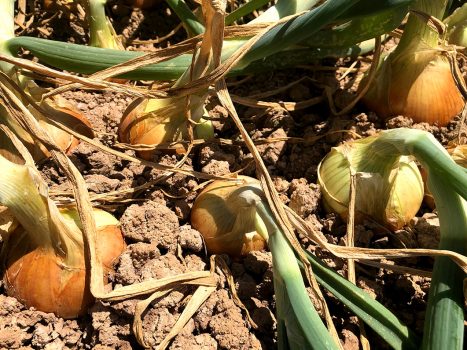