Three members of the Treasure Valley onion “family” were honored for their contributions to the industry at a special dinner on Monday, Feb. 4, in Ontario, OR.

The dinner, attended by family, friends and ag industry colleagues, recognized the addition of Jerry Baker of Baker & Murakami Produce in Ontario, Garry Bybee of Fiesta Farms/Eagle Eye Produce in Nyssa, OR, and Roy Hasebe of Hasebe Farms in Ontario, to the Oregon State University Diamond Pioneer Registry.

To be named to the registry, nominees must “have contributed a great deal to the development of Oregon’s agriculture and natural resources, and/or Oregon State University. Rather than short-term public service, this award reflects a lifetime of involvement. They should be 74 years of age or older and still be living. In particular, include individuals who have pioneered in some area of Oregon’s agriculture and natural resources, or have made innovative changes or performed public service that has helped make Oregon a better place to live.”

The three Feb. 4 honorees were among 23 recipients announced in October 2018.

At the recent dinner, Dr. Clint Shock, professor emeritus at OSU and former director of the Malheur Experiment Station, lauded the three Treasure Valley onion men for their service. The Diamond Pioneer Registry, established in March 1983 when the College of Agricultural Sciences observed its 75th anniversary, “recognizes the significant contributions of many of our friends and colleagues who have served agriculture and related areas throughout a portion of their careers.”

Jerry Baker, who “epitomizes the hard work, tenacity, and entrepreneurism necessary to be successful in agriculture,” was raised on a dairy farm and “never shied from hard work and knew early
on that he wanted to chart a career in agriculture.” His lifetime of service includes working with the Oregon Department of Agriculture and, after he “got his first bite of the entrepreneurial bug,” opening the
Idaho-Eastern Oregon branch of DeBruyn Produce. Today’s Baker & Murakami Produce Co. is “the largest fresh onion packing entity in the United States.” Jerry, who is 79, “remains active in his various businesses and still enjoys living on the original farm he grew up on in Vale with his wife, Judy.” Moreover, his contributions to ag “have made a significant impact on the lives and livelihoods of many Oregonians.”

Garry Bybee came from a farming family and chose early on in life to study other pursuits, including accounting and economics in college. After he and wife Ronda married, they moved to Arizona where Garry worked for Motorola.

“During his time there, Garry decided to reconnect to his formative farming years in Nyssa, where his family was in the onion business,” his bio said. “Leveraging Motorola’s global network, he began to ship
onions to Japan which sparked the interest of the Fiesta Farms Co-Op. Garry later took a position there, and eventually, he bought out the other members of the co-op to form Fiesta Farms, Inc.”

Garry has always been an active member in both his community and in the onion industry and has served in several roles in Malheur County and with the Idaho-Eastern Oregon Onion Committee and the Idaho-Oregon Fruit and Vegetable Association. And “his contributions have been notable and significant, and his success has created opportunities for many others.”

Roy Hasebe also grew up on his family’s farm in Ontario. Following military service, “Roy returned home to follow in his father’s footsteps as a farmer where he successfully grew the farm from 90 to 750 acres and became recognized as a farmer against whom others measure themselves.” Roy is also known for his “commitment to give back to the local community,” and he has been a lifelong volunteer in Ontario for “various causes and groups.”

Roy, who has “held a number of leadership roles in his industry and the community, has also served as a “mentor and model for many younger growers…” and is “recognized for his enthusiasm and commitment to see things through.”

OnionBusiness.com extends the heartiest of congratulations to these fine men, all examples of the very best of the onion industry. 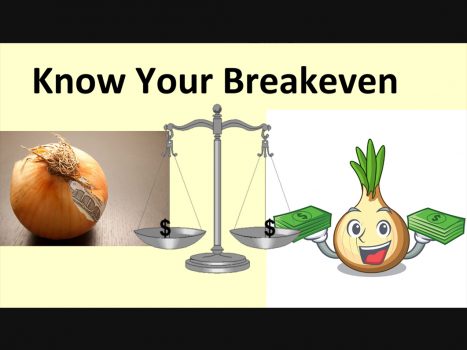 Greenway gives an in-depth – and honest – look at onion production