Last year at just about this time, onion veteran Trish Lovell moved from the Tri-Cities of Washington to Oregon, taking the position of Director of Sales for Curry & Co. in Brooks.

She remarked at the time it was “like going home,” explaining she had worked with Curry for seven years before moving to Washington – all part of a 30-plus year career that launched in 1986 with Jerry and Steve Baker at DeBruyn Produce in Ontario, OR.

During the years in Washington, Trish and husband Logan had maintained a home in Stayton, east of Salem – so going home meant just that. They moved back into their Stayton house.

On Aug. 16 OnionBusiness’s Sherise Jones had the opportunity to visit the Curry sales office in Brooks and spend time chatting with Trish and Curry owners Aaron and Holly Ensign.

During her day, which was also included several meetings, Trish took time to sit down with Sherise and reflect on her return to Oregon and Curry.

“It’s been an exciting year back at Curry,” Trish said, adding, “Aaron and Holly are remarkable people. Their insight and energy are wonderful. It’s definitely a team effort here, and all of the employees share management’s excitement.”

She said Curry is bolstering its onion program and has added new consumer pack equipment. “We’re working to build our onion program, and things are moving smoothly in that direction,” she said. The company will start its 2018 Oregon onion season this week with reds, and yellows will follow the week of Aug. 22. 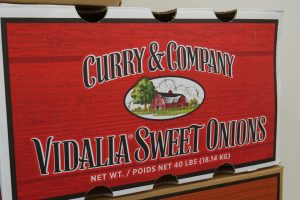 “Our Vidalia Sweet onion program is a valued part of our year-round sweet onion offerings,” she said. “We start shipping in April on opening day, and we offer Vidalias through the spring, along with 1015s out of Mexico and Texas. Once the West Coast starts up, our customers make the switch to regional sweets.”

While Trish has plenty to do with Curry’s onion sales, she is heading heads up sales for the company’s massive blueberry program as well. “We will sell 10 million pounds of blueberries this year,” she said. “Though the customers are mostly the same, I have been working to get to know the commodity, and it’s been a lot of fun.”

While at the ultra-hip. New York loft-style sales offices, Sherise had the chance to visit briefly with Aaron and Holly, who spoke highly of Trish. 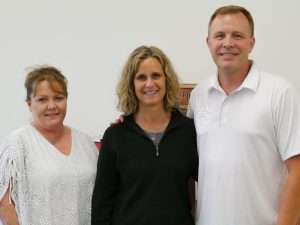 “Trish and all of our staff make a terrific team,” Aaron said. “We all work so well together and have the same ‘think outside the box’ approach to our business.” He said about acquiring Curry in 2016 has been “challenging but very rewarding, and we are so happy to be part of this industry.”

Looking ahead a few months, Trish will be travelling to the PMA Fresh Summit in Orlando to walk the show and meet with customers, and she will also be representing Curry & Company at the National Onion Association meeting in Maui next November.

“When I left the meeting with Trish, I had the feeling she is in a great place professionally and personally,” Sherise said. “She told me when she isn’t working, she and her husband often take a short drive to the Oregon coast for lunch. Boy, you can’t beat that!” 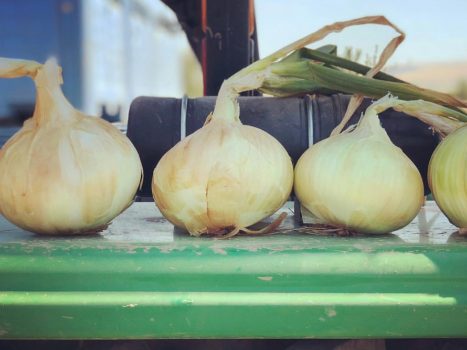