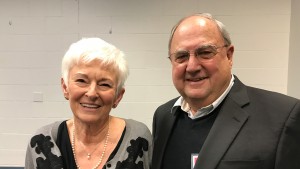 Two well-known and respected Treasure Valley names have been added to the roster of Idaho-Eastern Oregon Onion Committee Hall of Fame with the induction of Clinton Wissel and Kenneth Nelson.

The honors were celebrated during a luncheon presentation by IEOOC grower/shipper John Wong at the annual Idaho-Malheur County Onion Growers Meeting on Jan. 7.

Both men are Idaho natives and longtime onion farmers. 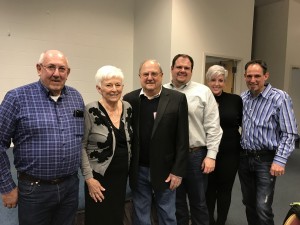 Clinton was born in Nampa, ID, the first of 11 children born to Ralph and Shirley Wissel. He follows in the footsteps of his grandfather and father, both Idaho farmers. At age 18, Clinton rented his own land and started raising wheat, beans and corn. He graduated from Nampa High School in 1961, after starting his farming career, and married his wife, Judy, in1963. His education continued in the practice of his work and various clinics and courses offered around the valley. In the 1990s he had the great opportunity to attend the Texas Executive Program for Agricultural Producers, a two-year program offered by Texas A&M that Clinton said was a “critical part of his development.”

Wissel also says he got married and bought a brand new John Deere 3010 in the same year and still has both. Judy says she will be very worried if she sees that tractor traded in for another model.”

Since his early start as an independent farmer, Clinton has raised onions, sugar beets, potatoes and mint as well. He considers raising onions to be the most rewarding aspect of his farming livelihood “in such a rapidly changing industry.”
In addition to farming, Wissel has also been active on ag boards and committees. He has served as a member of the Idaho Onion Growers Board and as president, and he also services as the board’s rep to Food Producers of Idaho. He is a member and trustee of the National Onion Association and the Idaho Department of Agriculture’s Food Safety Modernization Act Committee. Clinton said one highlight of his board tenure was to “fill in for Kay Riley on a visit to Washington DC, where the group lobbied congress and visited the FDA.”

He and Judy have been married for 53 years, and they are parents of two daughters and a son as well as grandparents of eight. 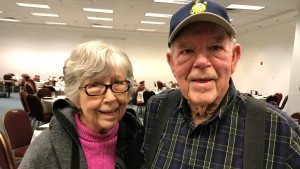 Kenneth Nelson was born on the Sells place in Apple Valley near Parma, ID, the first of eight offspring born to Herb and Dora Nelson. Herb was an established farmer with his father, who had come to Apple Valley at the turn of the 20th century.

During the 1930s, the decade when Kenneth was born, Herb entered into a share crop arrangement with the Johnsons of Parma. Ken continues sharecropping a portion of those original Johnson properties to this day. 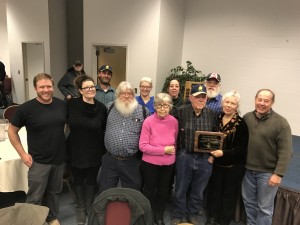 Hall of Fame recipient, Kenneth Nelson with wife, Norma and members of his family

Ken eventually purchased the family farm, and his younger brother, Steve, still lives there. Other family traditions continue as well: Ken attended Apple Valley grade school; his children attended the same school 25 years later and “found his initials carved in a brick on the west wall of the old school building, but… since it was against the rules to deface the bricks, he denied putting them there.”

After graduating from Parma High, Kenny enlisted in the U.S. Army and was stationed in Virginia. Though the Army indicated it would value his continued service, Ken returned to the family farm to work with his dad and to marry his girlfriend, Norma, in 1954.

The couple has “gone hand in hand through a lifetime of farming… good years and not-as-good years,” and they have four children who’ve all returned to the farm, “like their dad did.” Five generations later, it remains a working family farm.

Ken was the lead irrigator for the farm, and he rode a motorcycle that was modified to carry his shovel during his setting, checking and changing the water.

His core crops have always been onions, potatoes, sugar beets, corn and wheat, although he’s also grown beans, mint, hay and miscellaneous other crops. Onions are the “money crop” and what his bio calls his “pride and joy.”

Family time has been a major part of his life, with competitive games a part of get-togethers. He was also an avid hunter and fisherman, and in 1978 he pulled a record bass, six pounds and 13 ounces, out of Brownlee Reservoir. It hangs in the lobby of the Idaho Fish and Game Department.

Known for producing excellent yields, size and quality, Ken endured bad years like 2012 when yields were low and bulbs small. In 2016, when the farm’s onions were shredded down to the ground by hail, his team “managed to produce more than a thousand bags to the acre.”

Though he has “been letting the younger crowd do the heavy lifting” on the farm, Ken continues to ride the ditch banks, “shovel in hand, doing battle with his arch enemy, kochia.” 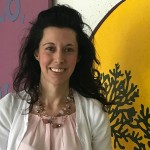