Full assessment of recent typhoon damage to Hokkaido’s onion production is sill being determined, but Jess Paulson of the Foreign Agricultural Services at the U.S. Embassy in Tokyo, told OnionBusiness.com in late August that the storms that hit Japan had impacted most crops as well as Hokkaido’s infrastructure.

“It is early still,” Paulson said on Sept. 2, adding, “Initial reports in the media indicate severe damage. However, a contact that we met with this evening just returned from Hokkaido and opined that the damage has been overstated.”

Paulson continued, “That said, in addition to crops, Hokkaido infrastructure has also been damaged.  Most railways are closed, as are several major roads.  Processing facilities were flooded and damaged so that preparing surviving crops will be delayed as well as their transit to market.”

Theresa Yoshioka, International Trade Manager with the Oregon Department of Ag’s division of Agriculture Development and Marketing, told OnionBusiness.com she had been in contact with a consultant in Japan about Hokkaido’s onion industry as well.

“He has heard that there was minimal damage to 30 percent loss,” Theresa said. She added more information will be coming in as the assessment continues.

“This is the second hit to Japanese onion production this year,” Paulson explained. “Hokkaido is the largest producer, but the second largest, Saga Prefecture, struggled with disease problems this year. The domestic price of onions had already risen before the typhoon rains hit Hokkaido.”

Paulson said while there has been no official confirmation, “One contact reported that the price had doubled 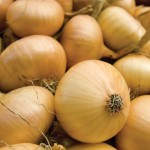