Back in January, Paul contacted OnionBusiness.com and asked if we could arrange a meeting with the Secretary during the NOA’s annual trip to Washington, D.C. After speaking with others in the industry, including Kay Riley with Snake River Produce in Nyssa, OR, we gladly made a few calls and began working with the Office of the Executive Secretariat employees to schedule a meeting.

Kay provided us with issues the onion industry members would like to have the Secretary address, and Greg Yielding, Executive Vice President of the NOA, provided us with the list of NOA members who would be attending the meeting.

Those issues included the matter of USA Harmonized GAP audits/FDA audits and an industry consensus that FSMA should be administered by the USDA; ag workforce and streamlining H-2A, passing immigration reform; trade with Taiwan and addressing the lower MRLs for Cadmium and other chemicals; USDA inspections; and the matter of increasing volume of imports coming into the U.S.

With the USDA meeting confirmed, Ashley Smith with the USDA became our primary contact, scheduling time and place, and the high-level meeting wheels were in motion.

It was thought at one point that Secretary Perdue had scheduling conflicts and could not personally attend, but the Office of the Executive Secretariat told us an opportunity opened up, and the Secretary was able after all to take part in the session.

While OnionBusiness was not able to make the meeting, we were very gratified to see a terrific group of industry members sitting at a conference table on Feb. 11 with Secretary Perdue leading a lively discussion.

Our thanks again to the folks at the United States Department of Agriculture and to Secretary Sonny Perdue for this opportunity. Like all onion advocates, we believe it is the high tide that floats all the boats, and by working and communicating with officials who are able to get things done, the U.S. onion industry will surely benefit.

A photo gallery is included below. All photos courtesy of the United States Department of Agriculture. 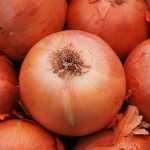