Noting that 2019 was a year of significant changes, Mike Davis, Managing Member of Tex-Mex Sales, said in early February that the Weslaco, TX-based onion operation is going full-steam ahead with 2020’s new crop season.

The changes he mentioned are the retirement of his father, Tex-Mex founder Marvin Davis (who continues to come to the office twice a week) and the addition of Mike’s daughter, Kristen, as a full-time team member at the company. Kristen, who graduated last year from Texas A&M-College Station with a major in Agriculture Economics and a minor in Horticulture, holds the dual positions of Food Safety Coordinator and Sales Manager.

“It’s been great having Kristen come in,” Mike said. “We’re very excited to have her handling food safety, which is a big component of our business, and also to have her serve as sales manager. She’s truly learning every part of the business.”

He continued, “These were some very big changes that happened in 2019 for Tex-Mex Sales.” With the groundwork first established by Marvin when he founded Tex-Mex in the early 1960s, the company remains very solid in its onion program, and Mike said, “Overall Tex-Mex Sales onion supplies in our different growing regions have stayed the same.”

It’s important, Mike and Kristen both explained, to build on the company’s history and to keep family traditions in place. Mike said, “Since I was a kid it was my dream to follow my father’s footsteps in this industry. As I got older, I realized that what I was working for and building would hopefully be something that my kids could continue.”

That dream has come to fruition.  “I was so happy that Kristen also had the same passion for the produce industry and wanted to continue our family business,” Mike continued. “She has jumped in with both feet on the food safety side since she arrived in May 2019 and is doing a superb job.

In keeping up with food safety protocol and training, Kristen works with Primus on Tex-Mex’s Primus GFS Certification.

But though she is new to the full-time sales/food safety and transportation roles and hit the ground running with the new-crop Mexico and Rio Grande Valley onion seasons, Kristen does have several years’ worth of summer employment at the onion operation already under her belt.

“I actually have had a lifelong attraction to the produce industry,” Kristen said. “I worked here on the onion line while I was in high school, and I really loved the process – it was really intriguing. Also, I love the sales side and working with my family.”

Love for her job includes passion for the onion industry itself, and Kristen described the “friendly competition” as also a deep sense of unity and camaraderie.

It’s clear that the father-daughter team works well together, with their individual talents meshing and their perspectives complimenting each other’s. Mike, who started working with his own dad when he was a boy, has seen huge changes in ag technology and a remarkable expansion of the onion industry.

“When I started, there were really only two varieties of short-day onions in Texas,” he said “Now there are new hybrids added every couple of years. We’re growing varieties we didn’t have eight years ago – and I’m sure it’s the same with long-day onions, too. Tech-wise, when I started everything was graded on chain sizers, and we used burlap in harvest. Now the onions are brought to the shed in bins, and there are cup sizers and pallet wrappers.”

Kristen, a Millennial who’s grown up in the technological whirlwind, added that onion-specific tech “has made the process a lot more organized and efficient.”

Technology has also changed the labor field, and Mike said although labor is not a major issue in South Texas now, as the minimum wage continues to increase, the industry will likely look at more automation.

In the office and shed, Tex-Mex has kept pace with new software over the years, but when he started, computerization was still relatively new. “We had a DOS-based system for years,” Mike said. “All inventory was done by hand at night. Technology now is incredible.” He said technology is especially important in food safety, with the company maintaining Produce Traceability Initiative compliance.

“Over the last 10 years we invested in machinery to improve efficiencies and the quality of our packed product at the packing facilities,” Mike said.

Regarding the changing industry and marketplace, Mike said in the early 1990s when he started full-time at Tex-Mex, domestic production saw Washington and Idaho finishing their storage crops in February. “Then Mexico would run for three or four weeks, followed by Texas,” he said.

“Now the Northwest goes into May, and Peru ships through March. The marketplaces have really changed.”

Mike said Tex-Mex has been working the same deals for several years, and 2020 will again see the company ship onions from Mexico, Texas and New Mexico and also represent some Washington growers.

With so much going on in the company, there’s no hiding the enthusiasm Mike and Kristen bring to the team. Mike was headed to Washington, D.C., on Feb. 9 as part of a National Onion Association trip. “Kristen will be handling things here in Texas, and I have complete confidence in her,” he said.

Tex-Mex will exhibit at Viva Fresh 2020 April 30-May 2 in San Antonio, Mike said, adding that the Texas show has proven to be beneficial to the state and the industry.

Stacked onto a solid framework created by Marvin Davis, the talents and energy of his son, Mike, and Mike’s daughter, Kristen, are maintaining and enlarging Marvin’s legacy – and the pride the Davis family takes in Tex-Mex is strong as well.

When asked what she wants to accomplish in the next five years, Kristen Davis answered, “I hope to continue learning, and more than anything I want to keep this family business and our traditions going.” 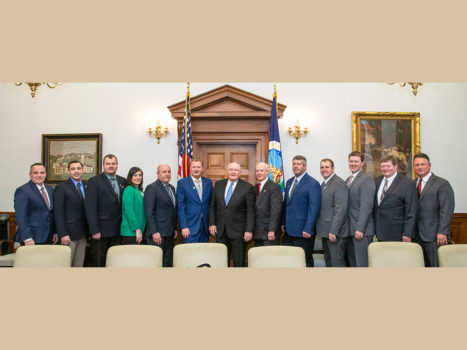