Torrential rains, heavy winds and scattered hail that hit much of Georgia from Friday, Jan. 20, through Sunday, Jan. 22, dumped anywhere from six to 8-plus inches of rain on Vidalia fields, but early reports were that losses appear minor.

According to Cliff Riner, Vidalia Onion and Vegetable Research Center coordinator and area onion agent, “Most of the belt got six inches of rain, with some areas getting eight or more. Our gauges only go so high.” Riner said on Jan. 24 that it was “too early to tell” the full extent of damage from the two-and-a-half-day twin weather system, but he said, “The onions are still recoverable for the most part. There’s only one field I would say might be a complete loss, and the others are wait and see. But I think they can still recover and make a crop. A lot depends on the upcoming weather, and the forecast is for more normal conditions.”

He added, “It’s a bit of a mixed bag, which it always is, but as far as hail losses, it could have been worse. And it’s early enough in the season that we don’t expect any complete losses.”

Riner said leading into the storm system were two weeks of warmer-than-normal temperatures, with daytime highs in the upper 70s and overnight lows in the 50.

“That caused the onions to grow rapidly,” he said. “The normal, cooler temperatures we’re supposed to see will help, with lows in the 40s at night and highs 60-65 during the day.”

He also said the maturity of the stands when the storms hit likely was beneficial to their recovery.

“Overall we were fortunate with the stands. We had very good planting and seed bed weather earlier in the season,” he said.

Riner noted, “I’m pretty optimistic now. When you go through a situation like this, it’s humbling to growers to see how weather can impact them.” 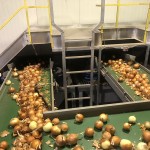