OnionBusiness.com’s Sherise Jones and Molly John were among the thousands of attendees at the 3rd Annual Viva Fresh Expo in Austin, TX, and report the show was successful on every level.

While educational sessions provided valuable insight into issues affecting the entire produce industry, onions in particular received a good bump from the timing of the show, which ran April 20-22. Sherise and Molly met up with onion folks from across the country who all said the show was a good opportunity to meet with customers, and the ladies were able to network with onion growers and shippers, and those that service the industry.

In fact, networking was the impetus behind the expo, which its web site was created “in response to our industry’s need for better opportunities to create meaningful networking opportunities that highlight products and build relationships.”

And Sherise said, “According to many of the exhibitors we interviewed, Viva Fresh delivered on its promise.”

She continued, “T.J. Runyan with Mesilla Valley Produce in Las Cruces, NM, told us the show allows for more one-on-one time with people he has come to see.”

He told Sherise and Molly, “It’s a smaller show, and the setup is perfect for spending quality time with customers.”

Another positive response came from Mark Bucek with RPE, Inc. in Idaho Falls. Mark said said that the show provided excellent traffic, adding, “We get great leads at this show, and our customers are here.”

For many growers and shippers, the timing of the show was key. Johnny White, sales manager for Shuman Produce in Reidsville, GA, told OnionBusiness.com the show is a great way to start off the Vidalia season.

“Since April is the kick-off to the Vidalia onions season, it makes sense for us to be here,” he said. “We can network with our existing customers, share information about the crop and develop new relationships too.”

Other growers and shippers commented that in addition to making customer connections, many service providers attend and exhibit at the show and provide product information and company updates.

Jessica Peri with Peri and Sons in Yerington, NV, said the show was a great venue to promote for the new season, and it also allowed the team to connect with vendors.

“We have a chance to see new ideas in packaging, seed and a variety of other products and services which is an extra bonus”, she said.

In addition to the expo, the Viva Fresh experience included a golf tournament, an over-the-top truly Austin reception and those educational sessions covering relevant industry issues. One particularly dynamic session looked at NAFTA, and a three-member panel covered the benefits of the North American Free Trade Agreement. On the panel were Dr. Luis A. Ribera, Associate Professor and Extension Economist in the Department of Agricultural Economics at Texas A&M University, Ron Lemaire, president of the Canadian Produce Marketing Association, and Luis Martinez Senties, Counselor for Agricultural Affairs in the Agricultural Office at the Embassy of Mexico in Washington D.C.

All panel members came loaded with graphics, charts, and statistics to make their general consensus case to keep NAFTA in place with a possible “tweak” or two.

His keynote address was a team effort with wife, Catherine S. Katz, Ph.D., President of Cuisinicity, www.cuisinicity.com at the luncheon on April 21.
Dr. Katz began his presentation addressing three components key to good health, “Feet, Fingers and Fork,” noting that a healthy lifestyle without smoking (fingers), plenty of exercise (feet), and plenty of fruits and vegetables is a recipe for less disease and better overall health.

Following his talk, his wife took the stage to provide a cooking demonstration of each dish that she developed for the lunch and talked about the menu items health benefits while attendees were served.

“Catherine’s couscous salad topped with our favorite veggie, onions, was a highlight of the meal,” Sherise said.

The pair’s approach food and healthy eating with a focus on “loving the planet” and advocate for environmental conservation in farming, food processing and delivery.

Sherise said Viva Fresh met with an “overwhelming response by exhibitors and attendees that was positive, and most said they will be back in 2018.” The 2018 event has been set April 5-7 at the Hill Country Marriott in San Antonio.

View photos from the event below: 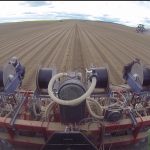 Video of the Week April 27