It’s no secret that many consumers, particularly those with lower or fixed income, have compromised their eating habits to make financial ends meet, and the upshot is often a diet lacking in nutrition.

That paradigm was examined at the recent Viva Fresh in Austin, where an educational session presented by Chef Michel Nischan showed the promise of Wholesome Wave, a nonprofit organization dedicated to assisting “under-served consumers.”

Chef Michel, a three-time James Beard Award winner with more than 30 years of experience, is well known for advocating a more healthful, sustainable food system. He is founder and CEO of Wholesome Wave, co-founder of the Chefs Action Network and also founder and partner in the former Dressing Room Restaurant with late actor Paul Newman.

With his team at Wholesome Wave, Nischan was influential in the legislative language in the recently passed Federal Farm Bill and its support of access to healthy, locally grown fruits and vegetables for low-income consumers, which is the thrust of Wholesome Wave. For additional information, visit www.wholesomewave.org, where you can read how the organization is working to assist “under-served consumers” and those that receive federal food assistance under the Supplemental Nutrition Assistance Program (SNAP).

Sherise Jones, president and publisher of OnionBusiness.com, attended the Austin session and said, “Michel explained that his organization accepts private and public donations to provide incentive to SNAP recipients to increase their produce consumption.”

The said the SNAP dollar value is doubled when those consumers purchase produce. And the program, she said, started at local farmers markets and has grown to include nationally a nationally recognized food chain.

“Many families that receive SNAP are looking to stretch their dollars, and many times that means selecting food items such rice and pasta that can satisfy their families hunger but lack the well-rounded nutrition they need,” Michel said in the session. “And providing healthy meals to your family is a challenge even without the monetary hurdles.”

He went on to explain that 44 million U.S. consumers rely on SNAP, and the program represents $213.7 billion dollars in annual food purchases.

“Right now in the U.S. the leading cause of death are diseases associated with obesity, and that costs America $1.4 trillion annually,” Nischan said. “Can you imagine the positive impact we would have we could change the diet habits of our citizens? At Wholesome Wave, we believe that by starting with SNAP recipients, we can begin to see deaths decrease and costs of these diet related diseases drop as well.”

Michel told the audience that Wholesome Wave has partnered with Los Angeles-area Target stores to provide coupons to SNAP recipients, allowing them to purchase produce at a 50 percent discount.

“Target loves the program,” Michel said. “Think about it. They are doing good work in their community, and the marketing benefit is tremendous. They provided $800,000 from their marketing funds to start the program, and because of the success, Target has plans to expand.”

Another component of Wholesome Wave includes working with physicians and health care professionals to identify individuals who would benefit from the Wholesome Wave program – ergo the title, Fresh Produce RX.

Participating health care professionals who identify patients in need of a healthier diet can write a prescription for produce coupons/vouchers.

“And if all of these efforts were not enough, Michel and his team are currently working on Wholesome Wave electronic cards that would recognize specific produce SKUs, making it more convenient for stores and recipients to participate,” Sherise said.

Nischan wrapped up the session by saying that donors and retail outlets can change the way the United States eats, reduce disease and build a healthier and happier society by participating in his organization or others like Wholesome Wave.

He said the organization is always searching for new partners, and he encouraged those that wish to donate or participate as a produce store provider to visit the Wholesome Wave website to learn more. 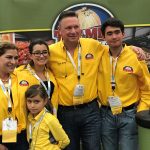