VOC to roll out new logo at PMA

Our friends at the Vidalia Onion Committee have announced they’ll be rolling out a brand new logo as well as a sneak peek at their 2018 marketing campaign during the PMA Fresh Summit in New Orleans Oct. 20-21.

In a prepared statement, VOC said that in addition to the rollout, it will be partnering with several well-known New Orleans restaurants to celebrate “Vidalia Onion Week” in the Crescent City.

In addition to the weeklong restaurant promo, VOC will feature former Top Chef contestant and Georgia native Eli Kirshtein at the Booth will be doing cooking demonstrations featuring Vidalia onions at the VOC Booth 4116 in the Georgia Pavilion.

OnionBusiness.com will be meeting with committee reps and their guest chef at PMA and will bring you all the details in October. 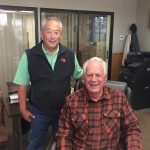