The new Volm Cos. manufacturing facility was opened with a ribbon-cutting ceremony on Tuesday, July 25, in Pasco, WA, and OnionBusiness’s Sherise Jones was on hand for the celebration.

This operation, which replaces a smaller facility in the Pasco area, is the third manufacturing operation and represents the 16th Volm outlet in the United States and Canada.

Officiating at the Pasco gathering were Alan Mueller, Volm Chairman of the Board, along with Daniel Mueller, president and CEO, and Matt Alexander, vice president of sales and marketing, as well as members of the company’s management team.

After the ribbon was cut, Pasco Mayor Matt Watkins welcomed Volm to the area and thanked the company’s leaders for their decision to join the Pasco business community. Alan Mueller then led a prayer asking for God’s blessing on the new venture.

Before the prayer, Alan spoke of Volm’s humble beginnings and credited the Almighty for the company’s many successes throughout its distinguished history.

Randy Hayden, executive director for the Port of Pasco, also welcomed Volm as an addition to the port’s industrial park, noting, “The park was initially established to bring in large food processors with the idea that we would have additional space for support industries like Volm. It’s designed to keep jobs here in the region, and specifically agriculture jobs. So it’s a natural fit to have Volm here.”

He went on to say, “We started talking to Volm about five years ago, and obviously we are very happy to see this day arrive.”

The industrial complex has another eight properties to accommodate large support operations like Volm, he said.

At the reception, Daniel Mueller explained to OnionBusiness the new Volm facility solidifies the company’s commitment to the area.

“We are proud to support the agriculture industry in this region, and we recognize its significance,” he said. “We’re very happy to be a part of it.”

Onion packers and shippers are happy about the Volm facility as well.

“It’s great to have Volm as a permanent fixture in our region,” noted Gary Atkin of Columbia Basin Onions. “They are a fine company, and they have true dedication and commitment to this area.”

The Antigo, WI-based company provides packaging and equipment solutions to the fresh produce industry, and prior to construction of the new Tri-Cities center, the main facility, two miles from the new site, had become too small. 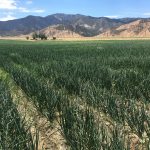 Market and Crop Update for July 27