OnionBusiness.com Publisher Sherise Jones was among those attending the Aug. 30 Washington State University Extension onion field day, which took place on one of Brent Hartley’s onion fields near the packing shed in Prosser.

Sherise said, “Everyone who was wondering what Extension Director Dr. Tim Waters and his staff were up to this past year walked away from the event blown away by the amount of research being done to assist onion growers in the region.”

She continued, “As always Dr. Waters and his staff organized an information-packed event that covered entomology, insecticide, drip irrigation, AMF inoculants, the WSU Onion Alert system and the Columbia Basin Research Committee, and the day included an onion cultivator trial planting. There was also WSU’s announcement of a $3.25 million multi-state research grant awarded for the study of pest and disease control for U.S.” onion and garlic crops.”

Sherise said the centralized location of the WSU event proved to be a big plus for turnout this year, with more than 100 growers, seed reps and other onion professionals coming to view the trials and listen to the well-presented research reports. 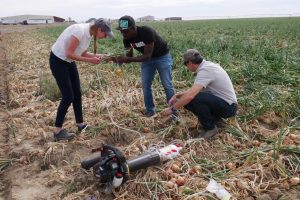 The report provided at the event included findings pertaining to seedcorn maggot and thrip treatments as well as other crop issues, and Sherise commented, “One of the real attention getters was the demonstration by WSU’s Adekunle Adesanya of a bioassay performed on onion thrip larvae to obtain a more precise resistance/susceptibility quantification.” She added, “A modified two-cycle handheld blower/vac was retrofitted to perform the testing.” You can view photos from the demo in the event gallery below.

And for the results of the insecticide resistance study and all of the findings included in the 2018 WSU Research report, or to sign up for the WSU Alert system, contact cwohleb@wsu.edu.

Check out all photos from the event below.

And now for a bit of good news… 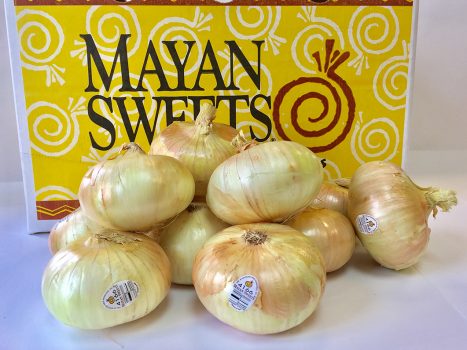