The 2017 Onion Field Day hosted by Washington State University took place on Thursday, Aug. 24, and drew a good-sized group of industry members to the Othello venue.

Among those in attendance was Sherise Jones of OnionBusiness.com, who said, “It was a beautiful day in Othello, and the event was heavily attended. Area Extension Educator Tim Waters and his staff and students did an excellent job presenting their research to the crowd.”

One of the most significant presentations of the day was by Larry Bauman of L&L Ag. Production. Larry spoke about the benefits growers have received over the past year from the Columbia Basin Research Committee, which was formed in 2016.

“Last year had about 40 percent of the acres participating with the voluntary $5 per acres contributions,” Larry said. “We were able to fund research for dry scale, thrips and other critical programs. Now we are looking to do more, and with increased funding we are working to bring more growers on board.”

One of the programs the group is most proud of is the “Grower Alert” that allows WSU Extension staff to quickly notify growers by email when issues in fields have been identified. Alerts can include anything from the onset of diseases to lightning strikes.

“This is an awesome tool,” Larry said. “Being able to get in front of issues before they become real problems has really helped.”

According to WSU staff, the alert system was relatively easy to put in place. WSU already had a successful alert system for potatoes, and staff said it made perfect sense to institute the same system for onions.

As a self-funding operation, Columbia Basin Research Committee operates on a voluntary basis, assessing $5 per acre for those participating. The fees are collected in confidence and administered by the Pacific Northwest Vegetable Association, or PNVA, headed by Sheri Nolan.

The non-profit has four principals: Larry Bauman from Connell; Lorin Grigg from Quincy; Michael Locati from Walla Walla; and Taryn Hartley from Prosser.

View Photos from the event: 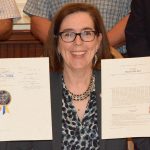