Are freight rates high or just where they needed to be?

Our logistics pro, Cain Adams with Trinity Logistics/Longboard Logistics in Meridian, ID, shared some great insight for this month’s look at freight.

He said, “Prior to the pandemic, we were reading almost daily of trucking companies hanging up the reins due to low rates or being forced to shut because of rising insurance costs, stricter regulations and higher equipment costs.

“Now, according to Internet Truckstop, we see a national average of $2.67 per mile being paid! Not only that but we’re hearing about lower fuel costs and more containers coming in from China than can be shipped back to be filled again are pumping the economy.”

And, Cain asked, “Pandemic? Recession? What recession? American buying habits have changed and it’s becoming a little boom instead of a feeling of recession.”

He continued, “Home offices and home schooling seems inevitable. With that, comes the need for desks, electronics and supplies. Zoom meetings are hip, and Americans are adapting.” Moreover, Americans “are moving too,” he said, adding, “In Idaho, we are seeing U-Haul trailers filled pulling in and buying houses cash on site. A new home is now at $450,000 and being sold in three to five days.”

Those who want to build from scratch “better get ready to wait until May of next year to move in,” Cain said. “Timber pricing is up, interest rates are down, and the stock market is thumbing its nose at unemployment numbers.”

Still, he said, “Let’s not forget we are in a pandemic. Right?

It has been big business. “Once the stay-at-home orders lifted, the dealers were slammed,” Cain said. “The low fuel prices also contributed to record sales. This adds fuel to the RV fire and new builds. The new builds, in turn, add more freight needs.”

And, ultimately, “All of these items being shipped are putting pressure on the truck capacity.”

He asked, “So what do we have to look forward to in 2020? Well, we can say we are glad Americans are adapting and overcoming some obstacles and, in turn, the economy has not been roughed up as much as we feared in April and May. America is having some struggles, but overall, it’s chugging along and adapting.”

He went on to say, “Moreover, a team load from Washington to New York ran us $8,200. Sure, it’s a holiday week, but some of these lanes are starting off hefty in pricing. Like $1,000 more per load hefty. We have a few hunches, why pricing is higher this year.”

And, he said, “Pricing is higher because in April, when prices were seriously low, and truckers sat for three to five days for a load. It mentally showed truckers they had to ask for more money on every load they took in case this happen again.

“Truckers are building up their nest eggs and paying down their equipment as fast as they can. They want to stay in business, and the only way they can is ask for that $2.67 per mile instead of getting the $1.90 last year. We hear it on every single call. ‘I won’t load this unless it’s a great rate. I cannot afford to.’”

Cain said, “We also think the imports are taking up a huge portion of capacity. More loads are hitting the Los Angeles port instead of through the Panama Canal. Boat rates are way up, and people at home are shopping way too much online. You know who you are. Oh yes, boat rates are also going up Sept. 1 by 20 percent because there is so much freight sitting in China waiting to be loaded.”

Looking at onions, he said, “If you look at the National Onion and Potato report for Sept. 1, 2020, you will see a vast difference of shipments this year compared to last year. We normally have a bit of a gap. The gap allows rates to calm down while switching over from California to the Northwest. Dispatchers forget about $8,200 loads they were booking out of California and remember what was paid out of the Northwest.

“We do not see a slowdown coming but wonder what February and March inventories will look like. We hope farmers can get as much in the sheds as possible. Think about that one for a bit. Right?

“Happy selling, and go try out an RV. Viewing America, the old-fashion way, is a great way to connect with your family and supports this great country we live in. Cheers.” 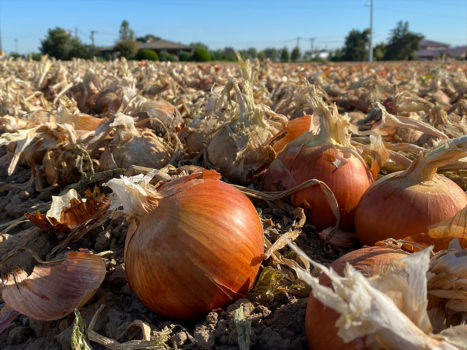 Market and Crop Update for September 3, 2020