Stuart told OnionBusiness the turnout was “good… all things considered,” and he said, “For everyone’s safety, I wanted to keep it low key, but we had approximately 50 people out individually or in small groups to check out the varieties.”

Trialed this year were “36 yellows, 10 reds and seven white varieties,” Stuart added. “Those include some ‘veterans,’ such as Vaquero, Legend and Redwing. Those debuted in the trial in the 1990s and still perform well today.”

He continued, “But how good an onion variety performs is like beauty – it’s all in the eye of the beholder. We want growers and shippers to look at the trial and look at the trial reports to see how the varieties fit in with what each farm or their buyers may want.”

Stuart provided lots of photos and said, “As you can see in the pictures, in the demonstration part of trial we have onions on display with their tops so people can see what the whole plants look like. We also have sets of lifted and topped bulbs to see what they would look like at harvest. Another set are cut open to show internal characteristics. People are then welcome to do some slicing and dicing on their own.”

And now that the Variety Days have taken place, he said, “We’ll probably begin harvesting the rest of the trial, our ‘data plots,’ next week. As always, we appreciate the opportunity to conduct the trial, and we appreciate the support of seeds companies and the Idaho-Eastern Oregon Onion Committee in making the trial possible.” 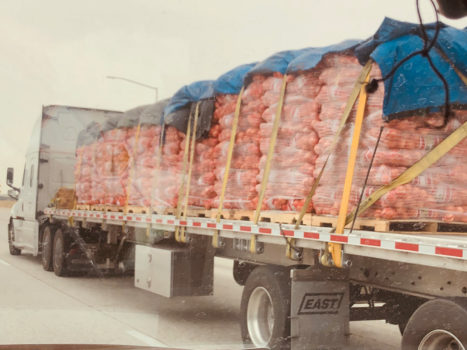 Are freight rates high or just where they needed to be?