Christy Hoepting, extension vegetable specialist at Cornell University Cooperative Extension in Albion, NY, was recently recognized for her “exemplary work on behalf of farmers, not just in the rich muck-soil region of western New York but statewide and nationally,” during the March 8 Winter Elba Muck Onion Growers meeting in that city.

Hoepting was given the Excellence in IPM Award by the New York State Integrated Pest Management Program (NYS IPM), with Dr. Jennifer Grant, director of the program, making the formal presentation at Cornell Cooperative Extension’s “Elba Muck Region Onion School,” according to Dr. Brian A. Nault, Department of Entomology at the New York State Agricultural Experiment Station in Geneva. Dr. Nault nominated Christy for the award based on her research of integrated pest management.

IPM looks at a “broad range of tactics that minimize the environmental, health and economic risks of pests and pesticides both,” according to a release announcing the award.

In his comments, Nault called Hoepting a “star in Cornell Cooperative Extension,” noting his colleague is “a gifted educator and advocate, more passionate and successful in promoting IPM practices than just about anyone I know.”

IPM weaves together a broad range of tactics that minimize the environmental, health and economic risks of pests and pesticides both, and while onions, with annual sales of approximately $40 million, are Christy’s primary focus, she also researches broccoli, cabbage and garlic produced in the Empire State.

A member of the extension team since 2001, Christy grew up north of Toronto and attended the University of Guelf, focusing on onion production while she worked on her master’s degree.

When a college advisor told her about a job opening with the Cornell Extension Service, Hoepting interviewed although she didn’t know what an extension really was.

That, obviously, has changed, and Hoepting is considered as an onion expert whose research has included hundreds of on-site trials. She has studied plant pathology and weed science as well as entomology, crop nutrition and even cultural practices. She’s explained her work at meetings and published articles. And she continues to track movement of insects and disease pests that threaten onions.

The release noted that New York growers know that on Tuesday mornings Christy will hold an informal “Muck Donut Hour” on a “corner of the road,” telling the farmers what she’s encountered in the past week.

Growers like Matt Mortellaro have lauded Hoepting’s research and her accessibility. Mortellaro is quoted as saying Christy is “extremely responsive, and she’s always listening.”

Dr. Grant said she wishes “we had a Christy Hoepting in every crop and corner of the state,” noting the young researcher “exemplifies the best in IPM, bringing science to the field and the field perspective to the science.”

For more information on the IPM program, visit nysipm.cornell.edu. 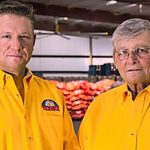